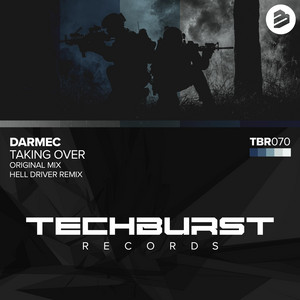 Just a few years after discovering techno, Darmec decided to start producing his own tracks in late 2011, and it didn’t take long for him to get hooked. Inspired by the driving, powerful, bass-orientated tracks of his favorite producers, he always looks to reproduce the atmosphere and energy of the dark underground clubs of Europe.

To begin producing at the age of 26, you could say Stuart was a late starter – but he is well on his way to making up for lost time. Going from strength to strength, he is now releasing on a number of well-respected labels – including Elektrax, Techburst Records, Electrovino Records, Audio Elite Records, Ausnahmezustand and Darker Sounds. As well as success with original tracks, Darmec has also proven his hand as a remixer, winning remix competitions for Darker Sounds.

His rising remix of ‘Crack is Whack’ by Hefty in particular went down a storm, supported by the likes of Hackler & Kuch and Patrick DSP. Notable landmarks have come along the way for Darmec, none less than having his tracks played by the likes of Deadmau5, Eddie Halliwell, Spartaque & Mark Sherry, and also the somewhat unexpected support of Martin Gore of Depeche Mode, who played the track ‘Fashion’ in his warm-up DJ set on their Delta Machine Tour 2013/2014 to packed out stadiums around the world.

Darmec is now making his name on the DJ circuit and relishing the opportunity to play his tunes to live audiences. Delivering his brand of dark, high-energy techno to crowds in countries such as Germany, Netherlands, Lithuania, Slovakia and the UK; Darmec is gradually growing into a prominent figure in the underground techno scene.

Darmec has been mentioned in our news coverage

Here are the latest Darmec mixes uploaded to Soundcloud.

Do you promote/manage Darmec? Login to our free Promotion Centre to update these details.