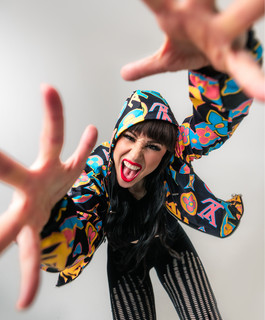 Charlotte started her DJ’ing career on 2 different Radio stations on which she had her own shows for over a year.

She then began DJ’ing on the club circuit in 2007 and has become a global favorite travelling regularly to countries such as Greece, Sri Lanka, China, France, Singapore, Indonesia, Croatia, Slovenia, Kosovo, Germany, Italy, Turkey, Malaysia, India, Dubai, Qatar, Oman, & The Philippines as well as many UK gigs at Top Celebrity Clubs.

Playing a mix of Hip Hop/R&B, Funky Commercial House and Slammin Electro with an urban twist as well as hosting the mic, her high energy and fun performances always get a crowd rocking wherever she goes!

Charlotte has had a massive passion for music for many years, and was on the dance scene at a very young age where she founded the legendary dance act The Narni Shakers. She loves a variety of music styles including Hip Hop/R&B, Drum and Bass, Garage and Electro / Soulful / Deep House, so becoming a DJ was something that came naturally to her. Luckily Charlotte’s mentor and long term boyfriend is Radio 1’s DJ Fabio (undoubtedly one of Dance Music’s Pioneers and voted one of the top 25 DJs of all time by Mix Mag in 2011).

Charlotte Devaney has been mentioned in our news coverage

Below is a sample playlists for Charlotte Devaney taken from spotify.