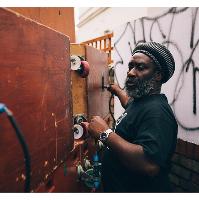 View all Channel One Sound System's events »   .   View events from the last 12 months »

Get more information about Outlook Festival 2020 including festival tickets, news, reviews and lineups.

In 1979, Mikey Dread and his brother Jah T began to play at blues parties and local dances having spent many years under the watchful eye of their father, owner operator of the famous Admiral Bailey Sound. They chose the name Channel One in homage to the legendary Jamaican record label of the same name whose tunes featured heavily in those early selections. Inspired by Bob Marley’s belief in uniting people through reggae music, Mikey was keen to introduce new people to dub reggae music and started touring around universities, where he secured a solid fan base.

Channel One’s mission is to break down barriers via reggae music, they have achieved this by playing new venues, new festivals and different countries, taking their unique sound to Australia, New Zealand, Israel, Turkey and all over Europe. Channel One also celebrated 30 consecutive years at the Notting Hill Carnival making them one of the must see soundsystems for attendees to Europes biggest street festival.

2009 saw Channel One embark on their hugely successful national Dub to Dubstep Tour, with financial backing from the Arts Council, via Blackroutes and support from Punch and Vagabondz. Channel One took their sound system to 6 cities, touring alongside Kromestar, RSD and Jazzsteppa, showcasing their dub reggae sound system as part of the tangible heritage behind dubstep. In 2011, Channel One have been on another tour, this time Dub to Jungle alongside Congo Natty, Tenor Fly, Congo Dubz, Nanci and Phoebe and Klose One. And finally in 2012 Channel One went on a Jamaica Party tour, celebrating Jamaica’s 50th year of independence – alongside Coki, Mala, Shy FX, The Bug and Flowdan, Top Cat, The Heatwave, General Roots, RoxXxan, Rtkal and Screama. Finally Channel One have toured with the legendary Twinkle Brothers, a concept put together by Mikey Dread. These tours have been a great way for Channel One to reach new audiences.

Channel One Sound System has been mentioned in our news coverage

Here are the latest Channel One Sound System mixes uploaded to Soundcloud.

Do you promote/manage Channel One Sound System? Login to our free Promotion Centre to update these details.