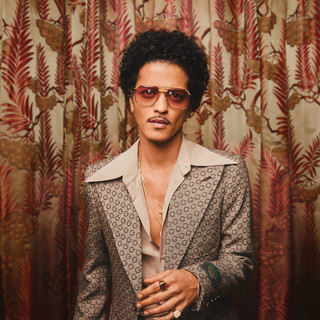 Bruno Mars is a 13 time Grammy Award nominee whose debut album has gone platinum 39 times worldwide. In addition he has sold over 45 million singles across the globe and has over 1 billion views on YouTube. Debut album 'Doo-Wops & Hooligans' was released in October 2010 and named "the year's finest pop debut: 10 near-perfect songs," by Rolling Stone. The album included the 12x platinum blockbuster single "Just the Way You Are," which hit number 1 in multiple countries and won the critically-acclaimed artist a Grammy Award for "Best Male Pop Vocal Performance." 'Doo-Wops & Hooligans' claimed two additional hit singles, the 10 times platinum "Grenade" and 6 times platinum "The Lazy Song."

In October 2012, Mars premiered the first single, "Locked Out of Heaven," from his highly-anticipated sophomore album Unorthodox Jukebox. On October 20th, Mars made his comeback to national television when he joined the elite club of hosts and performers for Saturday Night Live alongside the likes of Mick Jagger, Justin Timberlake and Elton John. Mars not only showcased his comedic talent to the millions watching, but also debuted the first live performance of "Locked Out of Heaven" and premiered a brand new song, "Young Girls," from the historic stage in New York City.

Unorthodox Jukebox is due in stores December 11th. Mars and his songwriting/production team The Smeezingtons (Mars, Philip Lawrence, Ari Levine) partnered with heavyweight producers including Jeff Bhasker, Mark Ronson and Diplo to create the 10-track album.

Following SNL, Mars has a rigorous fall schedule lined up to promote Unorthodox Jukebox both stateside and abroad, including a performance on the Victoria's Secret Fashion Show and multiple not-yet-announced TV performances.

The multitalented singer, songwriter, producer and musician was born to a musical family in Honolulu, Hawaii. His father, a Latin percussionist from Brooklyn, organized a Vegas-style revue that featured the entire family, including his mother, a talented vocalist. Four-year-old Mars observed his family performing Motown hits, doo-wop medleys and impersonations for enthusiastic crowds all over his native Waikiki Beach. Soon after, Mars became the world's youngest Elvis impersonator performing in front of the same enthusiastic crowds on a nightly basis.

Bruno Mars has been mentioned in our news coverage

Here are the latest Bruno Mars mixes uploaded to Soundcloud.

Do you promote/manage Bruno Mars? Login to our free Promotion Centre to update these details.