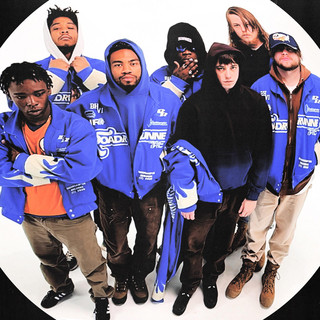 A left-field act whose material ranges from ominous posse cuts to light R&B ballads, BROCKHAMPTON prefer "all-American boy band" to "rap group" as a designation. The first lineup took shape on New Year's Day 2015 in San Marcos, Texas, and by the end of the year the band prevailed as winners of the VFILES Loud! talent search. This enabled them to issue the single "Dirt" via Fool's Gold, after which they self-released the mixtape All American Trash in March of 2016. Their widely distributed full-length effort, Saturation, arrived in March 2017 and featured the input of members Kevin Abstract (Ian Simpson), Matt Champion, Romil Hemnani, JOBA (Russell Boring), Dom McLennon (Dominique Simpson), Ameer Vann, and Merlyn Wood (William Wood). BROCKHAMPTON swiftly followed up with Saturation's sequel -- Saturation II -- later that summer. That winter, the boys issued their third effort of the year, Saturation III. The final installment in the series was also their highest charting to date, peaking at 15 on the Billboard 200 and at number five on the R&B/Hip-Hop chart.

Brockhampton has been mentioned in our news coverage

Below is a sample playlists for Brockhampton taken from spotify.

Do you promote/manage Brockhampton? Login to our free Promotion Centre to update these details.