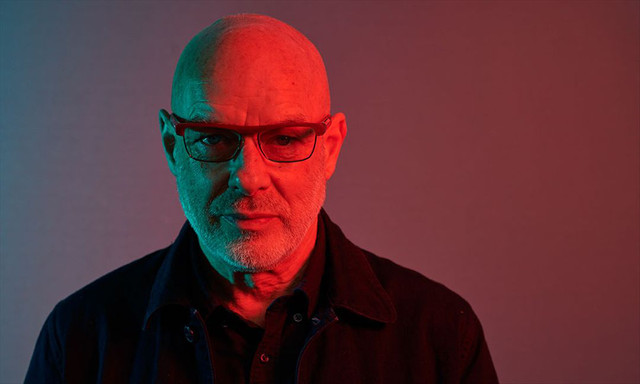 Brian Eno (born Brian Peter George Eno 15th May 1948 in Woodbridge, Suffolk - later adding St John le Baptiste de la Salle to his name) is a British self proclaimed 'non-musician', who has made contributions to the music community as an instrumentalist, composer, record producer, music theorist and singer. He's commonly regarded as the father of ambient music, although he has worked in many genres and fields of music throughout his career. Eno first came to prominence as the keyboard and synthesizer player and general sonic wizard in the glam rock and art rock band Roxy Music. After leaving Roxy Music, Eno recorded four highly idiosyncratic and original rock albums, later turning to more abstract sound-scapes on subsequent albums such as 1975's Discreet Music and 1978's Ambient 1: Music for Airports. Since then, he has released dozens of albums (many in collaboration with like-minded musicians, such as Harold Budd and Robert Fripp) which demonstrate his unique approach to music. He has, however, occasionally returned to the pop idioms which were more prominent in his earliest work. His production credits include some of the most respected albums by Devo, Talking Heads, U2, Laurie Anderson, Paul Simon and Coldplay. Contrary to popular belief, Brian Eno did not produce David Bowie's popular Berlin Trilogy (Low, Heroes, and Lodger). He performed and co-wrote tracks on all three albums, but they were produced by Tony Visconti. He did, however, co-produce Bowie's 1995 1. Outside. He also produced three of the Talking Heads most acclaimed albums, More Songs About Buildings and Food, Fear of Music and Remain in Light. Talking Heads' front-man David Byrne has worked collaboratively with Eno on the albums My Life in the Bush of Ghosts released in 1981, which has been described as "[a] pioneering work for countless styles connected to electronics, ambience, and Third World music", and recently in 2008 on Everything That Happens Will Happen Today, which blends electronic and gospel music and was released without the use of a record label. Eno has also pursued several artistic ventures parallel to his music career, including visual art installations, a regular column in the newspaper The Observer and, with artist Peter Schmidt, "Oblique Strategies", a deck of cards used in finding various artistic strategies which has been used by Eno since early in his career. User-contributed text is available under the Creative Commons By-SA License and may also be available under the GNU FDL.

Brian Eno has been mentioned in our news coverage

Below is a sample playlists for Brian Eno taken from spotify.

Do you promote/manage Brian Eno? Login to our free Promotion Centre to update these details.