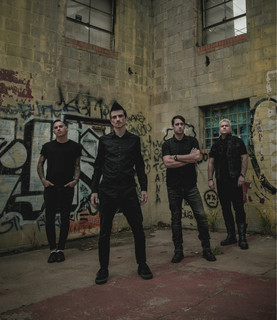 Anti-Flag is a punk rock band based in the United States, formed in 1988 in Pittsburgh, Pennsylvania, and known for its outspoken left-wing political views, focusing on anti-war activism, imperialism, class struggle, human rights, and other sociopolitical sentiments. Members include singer/guitarist Justin Sane, singer/bassist Chris Barker, guitarist Chris Head, and drummer Pat Thetic; Chris Barker ("Chris #2") replaced original bassist Andy Flag in 1999. The band is known also for their advocacy of progressive political action groups such as Greenpeace and Amnesty International. Most recently, the band has focused criticism on the United States bailouts, which were executed to give massive portions of capital directly towards salvaging the national banks.

Making their debut at a local Pittsburgh radio station in 1993, Anti-Flag got together for the sake of responding to their disgust at religion, nationalism, and fascism. Justin Sane, Andy Flag, and Pat Thetic bopped around their hometown much to the dismay of skinheads while recruiting a following who proudly wore torn-up upside-down flags as patches. In 1997, after releasing a handful of singles, opening for their idols the U.K. Subs, the Exploited, and the Circle Jerks, and briefly touring the East Coast -- which led to the departure of Andy Flag -- Die for the Government was released, and 20,000 copies, four bassists, and four North American tours later, Anti-Flag gained their reputation for recapturing the old-school ethics of punk: fast, loud, obnoxious, and anti-everything that ends with an "ism."

Chris Head was added to the lineup in 1997 and two years later bassist Chris #2 joined on as well to complete the four-piece. Their System Doesn't Work for You, a reissue of their out of print EP North America Sucks along with additional previously unreleased songs, followed in 1998 on the band's newly founded A-F Records. They released A New Kind of Army in 1999 on Go Kart Records, hoping not only to push their beliefs to a wider audience but, more importantly, just to play out around the world while flipping two fingers in the air to everyone they're against. A summer stint on the Warped Tour brought an expanded audience and new friends, including NOFX's Fat Mike over at Fat Wreck Chords. The label put out 2001's Underground Network, recorded with the help of Mass Girorgini (Screeching Weasel, Common Rider). Half of the tracks for their next effort, Mobilize, were recorded live in their hometown in December 2001; the disc came out in February 2002, and it fittingly also contained many songs, most explicitly "911 for Peace," that reflected the World Trade Center terrorist attacks.

In early 2002, Sane released a solo record entitled Life, Love and the Pursuit of Justice via A-F, and it mostly contained a sonically stripped-down version of his main band's political agenda. Anti-Flag's contribution to the BYO Split Series came out in fall 2002 with their split with the Bouncing Souls, and a year later they issued their next full-length, The Terror State, on Fat Wreck. The four-song EP Live at Fireside Bowl also appeared on Liberation. Released in 2004, the live Death of a Nation DVD chronicled the band's U.S. tour in support of The Terror State, and that same year, A-F reissued A New Kind of Army. Not surprisingly, the band also became involved with Punk Voter, a coalition of punk bands and artists who worked to raise voter awareness and participation -- namely against George W. Bush -- for the 2004 election, and headlined the Rock Against Bush tour. In a somewhat unexpected move, Anti-Flag next signed to RCA in April 2005; they issued For Blood and Empire the following March. In October 2007 the band released A Benefit for Victims of Violent Crime on their own A-F label, an EP (with a combination of both new songs and live tracks) whose proceeds went to the Center for Victims of Violence and Crime, a decision made after Chris #2 lost his sister to homicide earlier that year. In 2008, the band released The Bright Lights of America, and the Tony Visconti-produced album would be their last for RCA as Anti-Flag made the jump to SideOneDummy. Back on an independent label and now recording in their own studio, the band wasted no time in putting out their eighth studio album, The People or the Gun, in 2009. As always, Anti-Flag continued to stay politically active, donating profits from the album to Amnesty International, as well as attending a G-20 protest in their home town. Inspired by the Occupy Wall Street movement, the band followed up in 2012 with the politically charged The General Strike.

On January 16, 2015, the band announced they will release their ninth studio album titled American Spring, via Spinefarm Records. The album was released on May 26, 2015. Read more on Last.fm. User-contributed text is available under the Creative Commons By-SA License; additional terms may apply.

Anti-Flag has been mentioned in our news coverage

Here are the latest Anti-Flag mixes uploaded to Soundcloud.

Do you promote/manage Anti-Flag? Login to our free Promotion Centre to update these details.