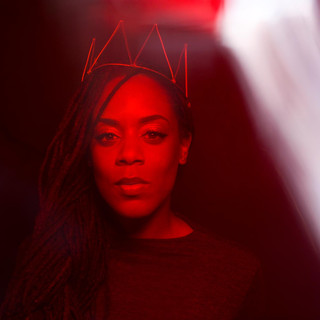 Hailing from New Haven, CT, Akua Naru's journey to acclaimed hip hop artist has led her from America's North-East Coast to Cologne, Germany, where she currently resides and creates music. Along this female wordsmith's journey, there have been many stops - Philadelphia, China, and Ghana, among others - have all informed the wisdom and perspective which is evident in her music.

With the release of her debut album, "The Journey Aflame", Naru has in a short time positioned herself on the scene as a model for what women can be in hip hop. Since the release, the album has been written about in several countries and deemed a classic hip hop contribution by hip hop critics from New York to Moscow. Placing at number one on the US college radio charts, with the Jr & Ph7 produced single "The World Is Listening", Naru has definitely been doing just that, making the world listen. With production accredited to some of Germany's finest names in hip-hop, from production powerhouse Drumkidz, Jr & Ph7, 7inch, and more, "The Journey Aflame" has definitely forged its place into hip hop history. With that, Naru reveals that her journey has not only been set aflame; it has just begun.

Representing strongly when performing with Digflo, her notorious 6-piece band, or with performances alone with a DJ, Naru has a reputation for captivating audiences, hyping crowds, and inspiring many. Clearly, her music and performances are a testiment to the legacy of soul music and the powerful trailblazing female artist traditon on which it builds.

Akua Naru has been mentioned in our news coverage

Top 10 live music events in the North this April

Here are the latest Akua Naru mixes uploaded to Soundcloud.

Do you promote/manage Akua Naru? Login to our free Promotion Centre to update these details.