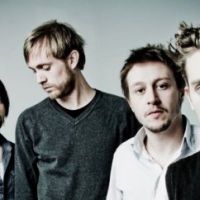 65daysofstatic (also known by the abbreviations 65dos, 65days, or simply 65) are an instrumental post-rock band from Sheffield, England. The band is composed of Paul Wolinski, Joe Shrewsbury, Rob Jones and Simon Wright. The band has thus far released three albums: The Fall of Math, One Time for All Time, and The Destruction of Small Ideas. Initially, the band interspersed heavy, progressive, guitar-driven instrumental sections with live drums and off-beat sampled drums akin to those of Aphex Twin, although since their second album they have developed their work to include keyboard parts.

65 Days of Static has been mentioned in our news coverage

Friendly Fires and The Invisible at Standon Calling

Bestival 2009: Only a Handful of Tickets Left!

Do you promote/manage 65 Days of Static? Login to our free Promotion Centre to update these details.