Keep track of UK Underground Psychedelic Events events, tickets and news - all in one place. Join this group now for updates as they happen!

Lucy May-Ireland from Strange Daze, take some time to catch up with the Monk3yLogic lads, ahead of their LIVE performance at Strange Daze 13th Birthday.

Monk3ylogic are a Bristol based Psybreaks duo who work tirelessly in the studio to bring their 'unique, groove drenched style' to the masses. Playing dance floors all over the world and working with top UK underground labels Liquid, Broken Robot and Broken you can also find them taking their electrifying and ever evolving sound to many major UK festivals and events.
.
Ahead of their set at Strange Daze on September 30th, Will and Mike are talking to us today about their creative process, new studio and their experience of the psy-trance scene.
.
.
You guys will be playing at Strange Daze 13th Birthday at the Zombie Shack on September 30th, what can we expect from your set?

It's a live set, so you'll hear lots of new and unreleased Monk3ylogic tracks, plus some of our older favourites. If you don't know what that sounds like, it's breaks, it's psy, it's techno, and don't expect each track to sound like the last!
.
.
You guys recently played at Boomtown, how was it?

The word epic was basically made for Boomtown, so many stages set in the most amazing landscapes - it's like walking round a film set with a banging rig around every corner. We played on Saturday at the Psy Forest stage for Liquid records and it was an amazing experience, huge stage with loads of people partying hard! We've played there once before in 2013, to about 10,000 people on Friday night on Arcadia stage. Being involved in that was without a doubt one of the most amazing experiences of our Monk3ylogic journey so far!
.
.
I noticed your new studio updates on your website, is it finished now? Tell me a little about how you designed it.

Finished - not yet! But it's up and running now. Sound treatment for the room is the next stage, that's a job for the long winter nights. In terms of design, we didn't have unlimited space, but we made sure we've got space for both of us to sit and work, plus a sofa to chill out on if one of us needs a break, or for when we've got guests. Plus lots of natural light, might not be first on the list for most studios but we think it's pretty important.
.
.
How does it shape the sound, does designing your own studio allow you to have more freedom in your creative process?

Having the right space for both of us to work, with access to the main PC, keyboard, controllers and space for 2 laptops as well means that we can focus on writing and being creative without the studio getting in the way, I think that's the main benefit. Hopefully once we get the sound treatment done that will help with squeezing every last drop from our mixes!
.
.
What is the creative process like, do you use mostly digital synths or outboard gear?

These days it's almost all software. We've got a Virus synthesiser, and a JP8080 which get used occasionally but in the main we have a set of VST synths and effects that we know and love and use for most tracks. Every so often we'll add something new, of course.
.
.
When did you first start producing?

We started writing together in January 2009 and, just had enough music for our debut live set at the Tribe of Frog stage at Waveform festival, in September the same year. Both of us had been writing and producing before then though.
.
.
What got you guys into psy-trance? When and where did you first discover the scene?

We both independently got into psy-trance in the early 2000s. [Will]: I first heard psy-trance at one of the earliest Tribe of Frog parties in 1999, but didn't really get it for another year or two. Pretty soon I was writing though, and had my first gig playing psy in 2002, then first played as Subliminal System, in 2006. (ed - Will's alter ego project is Subliminal System, who are also performing Live at Strange Dze 13th Birthday)
.
.
What is it like working as a duo? How is the workload split, do you both bring different skills to the table?

It's great! If it wasn't there's no way we'd still be doing it all these years later! We both produce, sometimes writing tracks by ourselves, but most tracks are written together. We've definitely got different talents, but who does what really varies from track to track.
.
.
How do you keep your sound current and unique? How does your sound differ from other acts on the scene right now?

To be honest I wouldn't say we focus on trying to make our sound current or unique. Certainly we listen to loads of new music and take influences from it, but at the end of the day we write music that we want to hear - hopefully other people will like it too! Perhaps we're different to other acts in the variation of beats and bass-lines that you'll hear in our set - we like to keep it interesting.
.
.
What?s been the biggest achievement of your careers as DJs and producers?

Well see above for our gig at Arcadia for one of them! That was crazy! We also played on Arcadia at Glastonbury with Orbital headlining a couple of hours later. Getting our first release on Broken Robot back in the day was also right up there - that was the point we though we had something good going on!
.
.
Who inspires you? Are there any up and coming DJs and producers that stand out to you at the moment?

There's a lot that inspires us, but Hedflux, Noisia, Far Too Loud, Neurodriver, Prodigy, Bad Tango, Victor Ruiz, Nanoplex, Brainiac, Scorb, Broken Eye, Mind Vortex to name a few - probably missed out loads there too!
.
.
Thank you so much to Will and Mike for speaking to us today, check out the link to their soundcloud below to discover their sound and be sure to follow them on social media! 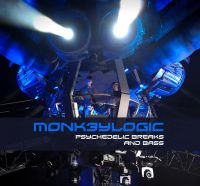