The three-day music festival will be held at York Sports Club between Friday June 19th and Sunday June 21st 2020.

Opening night headliners Madness, who have chalked up no fewer than 15 UK Top 10 singles and seven Top 10 albums, will be joined by indie chart-toppers Lightning Seeds, Craig Charles with his famous Funk and Soul Club DJ set together with Leeds indie rockers Apollo Junction and York’s very own Violet Contours.

Westlife headline on the Saturday night as part of their UK-wide Stadiums in the Summer Tour. The UK’s top selling album group of the 21st century will perform classic hits such as Swear It Again, Flying Without Wings and You Raise Me Up together with new songs from their forthcoming album Spectrum.
Joining Westlife on the night will be superstar pop group All Saints, Brit singer-songwriter Sophie Ellis Bextor, indie rock band Scouting for Girls and Take That’s Howard Donald, who will be spinning the discs for a very special DJ set.

Sunday night headliner is none other than international superstar Lionel Richie. The four-time Grammy Award-winner will perform a hit-packed concert that covers his extensive and much-loved repertoire – from his hit-making days with the Commodores right up to the present day.
York Festival is presented by promoters Cuffe and Taylor who famously brought Britney Spears’ headline show to Scarborough Open Air Theatre in 2018 and staged Rod Stewart’s massive 2019 sell-out gig at York Racecourse.

Director Peter Taylor said: “This is the very first York Festival so we wanted to make this a very special debut year.

“To have Lionel Richie, Westlife and Madness as headliners – alongside many other brilliant chart-topping artists – is a real coup. We feel this is the perfect line-up for the first year of what we hope will become a major annual event in this wonderful and historic city.
“We cannot wait for Friday June 19th and opening night. This really is going to be a weekend to remember!”

Nigel Durham, Trustee of York Sports Club and Chairman of York Cricket Club, said: “We are delighted to be hosting the first York Festival – a major new event for the city of York.

“An historic city the size and stature of ours truly deserves a high-profile music festival like this. And to be attracting such massive stars as Lionel Richie, Westlife and Madness is just brilliant.

“And with the festival being staged in the heart of the city, right here at York Sports Club, this really will capture the imagination and be a great thing for the city, residents, local businesses and visitors.”
Cuffe and Taylor are working closely with City of York Council and Make It York, which showcases and promotes the city around the world.

Welcoming the York Festival line-up, Sean Bullick, managing director of Make It York, said: “York Festival will be a brilliant addition to the city’s already busy calendar of summer events for both residents and visitors to enjoy. Welcoming such music legends and chart-topping artists, as well as showcasing local talent, is another step forward for York’s cultural offer and we are delighted to help spread the word to audiences.”

GATES OPEN AT 5PM ON FRIDAY 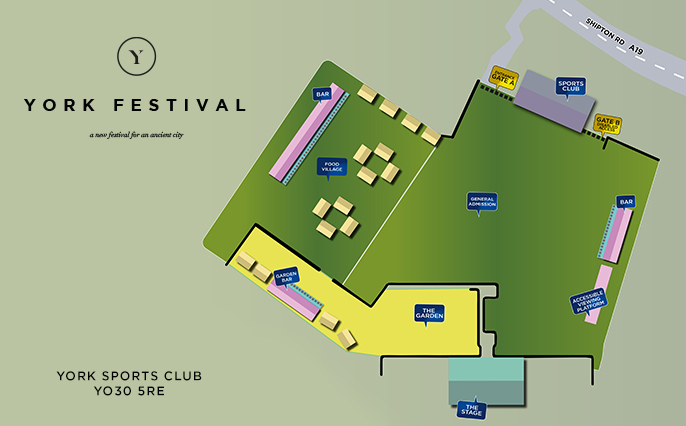 Age Restrictions: Under 16s must be accompanied by an adult aged 18 and over who has their own ticket

York Festival has been working hard to ensure they offer an accessible and enjoyable experience for all of our customers. Please read the below information before purchasing your ticket(s)

The deadline for applying for all accessible tickets is 19th May 2020.

More information will be available nearer the time including train and bus timetables.

Where: York Sports Club, Clifton Park, York, YO30 5RE

Line up for York Festival