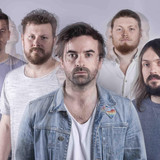 The Travelling Band are an Alternative folk band from Manchester, England famous for their vocal harmonies, honest song-writing and exciting live shows. Their shimmering blend of cosmic-country-pop and nu-folk has made them one of the most talked about artists to emerge from the Manchester music scene. A recording project in New York City in 2006, led a collective of like minded souls to record what was to become “Under the Pavement”, their first studio album. ‘Under the Pavement' was very well received by the UK media, gaining BBC Radio 6 ‘Album of the Day’, BBC Radio 2 'Single of the week’ and a featured song in the Ian Dury biopic 'Sex Drugs & Rock n Roll'. The band have become a firm favorite on the thriving British festival scene. After winning the ‘Glastonbury Emerging Talent Competition’

2010 saw the release a live album 'Arrears not Careers' and their festival anthem 'Sundial'. A limited edition 7" vinyl of 'The Horizon, me and you' was released on the Too Pure Singles Club in August.

2011 sees the band preparing for an intense year of global touring with a host of gigs and festivals appearances already confirmed to promote their highly anticipated new album 'SCREAMING IS SOMETHING' scheduled for an early summer release. “The sounds they generate took me back to my musical roots… Marvellous music to savour and enjoy” - Michael Eavis, Glastonbury Festival

The Travelling Band has been mentioned in our news coverage

The Travelling Band to tour the UK

Sounds From The Other City 2014

Un-Convention presents An Audience With The Travelling Band

Here are the latest The Travelling Band mixes uploaded to Soundcloud.

Do you promote/manage The Travelling Band? Login to our free Promotion Centre to update these details.