» Events » Events by artist » The Heliocentrics 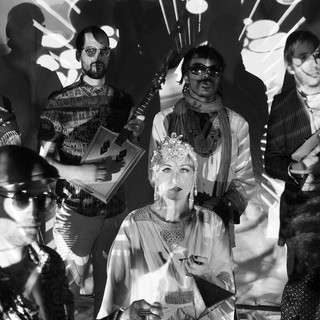 The Heliocentrics tickets and 2022 tour dates

The Heliocentrics is a London based music collective breaking boundaries between funk, rock, electronic, ethnic traditions, and experimental music.

The Heliocentricsâ€™ debut album, Out There (2007) was a confounding piece of work. Drawing from the funk universe of James Brown, the disorienting asymmetry of Sun Ra, the cinematic scope of Ennio Morricone and the sublime fusion of David Axelrod, musique concrete, post-punk and krautrock, it pointed the way towards a brand new kind of psychedelia, one that could only come from many years of musical evolution and the refusal to conform to a single genre.

The bandâ€™s collective drive is to find an individual voice, and they search for it in an alternate galaxy where the orbits of funk, jazz, psychedelic, electronic, avant-garde and â€œethnicâ€ music all revolve around â€œThe One.â€ Drummer Malcolm Catto and bassist Jake Ferguson are the two constants behind the UK ensemble, with Nigerian guitarist Ade Owusu the irregular third. Equally musicians and music fans, they have been playing together for over a decade.

Back at Now-Again Records with 13 Degrees of Reality, The Heliocentrics have returned to develop their epic vision of psychedelic funk, while exploring the possibilities created by their myriad influences â€“ Latin, African, and more. Whether itâ€™s the creative fusions of Descarga Electronica or the string-led Collateral Damage, The Heliocentricsâ€™ music will be lapped up by crate-diggers and lovers of questing spirits alike.

Indeed, they have earned lifetime fans in the likes of Madlib (with whom Catto has collaborated on numerous Yesterdays New Quintet projects), DJ Shadow (both as a touring ensemble and in the studio), Quantic and Ethiopian jazz giant Mulatu Astatke, with whom The Heliocentrics recorded and released Inspiration Information 3, the fourth classic Mulatu album â€“ released nearly forty years after his other three.

Out There may have been one hell of an opening volley, but having spent some years in the wild running among mavericks like Astatke and Oriental Jazz pioneer Lloyd Miller, The Heliocentrics have realized that their strongest statements are made somewhere between the persistent fuzz of Owusuâ€™s distorted guitar, Cattoâ€™s impossible syncopation and Fergusonâ€™s loping bass lines. 13 Degrees of Reality is one of the most distinctive musical statements youâ€™ll hear all year. Read more on Last.fm. User-contributed text is available under the Creative Commons By-SA License; additional terms may apply.

The Heliocentrics has been mentioned in our news coverage

Below is a sample playlists for The Heliocentrics taken from spotify.

Do you promote/manage The Heliocentrics? Login to our free Promotion Centre to update these details.