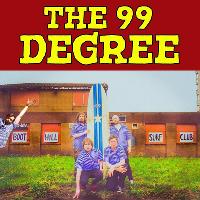 Energetic live shows frequently draw comparisons with Fat White Family, The Growlers, The Cramps, Black Lips and The Allah Las but with something defiantly their own and increasingly becoming labelled as "Black Surf". After gaining notoriety with DIY headline events and support slots with some of the alternative scene's best names (The Fall, King Khan & BBQ, The Shivas, Mystic Braves, Kid Congo, Death Valley Girls, The Schizophonics) the band’s debut EP release 'Boot Hill Surf Club' was released in 2017.

2019 has seen the release of double A-side single Love (Like I Need You)/Bed Of Bones on Sour Grapes Records and word is now creeping further afield out of Manchester’s basement venues.

THE 99 DEGREE has been mentioned in our news coverage

On The Buses with Tom Wainwright

Mixmag: The end of e

Here are the latest THE 99 DEGREE mixes uploaded to Soundcloud.