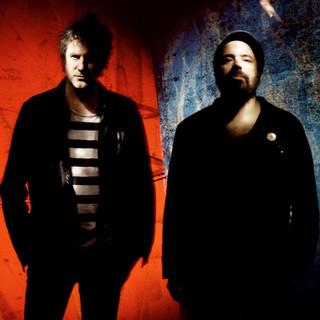 Swervedriver are a 1990s British guitar band initially associated with "shoegazing", however their heavier rock & roll style also related them to the grunge genre coming from the U.S. Pacific Northwest. Some music writers considered them to be Britain's answer to this sound. Regardless of labels, the band's mix of storming and swirling guitar experimentation often crossed into psychedelia, coupled with mystical lyrics that often praised the nihilism of sports cars, racing and the open road.

Their origins sprung from Oxford, United Kingdom in 1984 with the formation of a group called Shake Appeal, named after a song from one of their main influences, The Stooges. Consisting of vocalist/guitarists Adam Franklin and Jimmy Hartridge, lead vocalist Graham Franklin (Adam's brother), bassist Adi Vines, and drummer Paddy Pulzer; Shake Appeal went ahead reproducing the sounds of American garage rock of the late 60's and early 70's. The group wrote what would become Swervedriver's first classic "Son of Mustang Ford," however after a few years the band began to fall apart when both Graham and Paddy left.

The remaining three members drafted drummer Graham Bonnar, but by this time the group's sound mutated significantly under the influence of re-invented guitar music by American bands like Dinosaur Jr., and Sonic Youth. So with a new lineup and new sound came a new name, Swervedriver. Their hometown colleagues from fellow shoegazing group Ride passed their re-recorded demo of "Son of Mustang Ford" to Alan McGee of Creation Records; who, as legend has it, played the tape for the first time while cruising the inner streets of Los Angeles in a limo. The experience caused him sign the band immediately.

Swervedriver hasn't been mentioned in our news coverage

Below is a sample playlists for Swervedriver taken from spotify.

Do you promote/manage Swervedriver? Login to our free Promotion Centre to update these details.