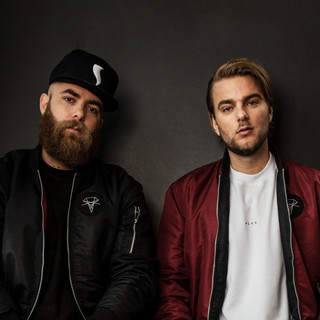 Showtek is the globally-celebrated Dutch production duo composed of brothers Wouter and Sjoerd Janssen. They have dominated the international music industry with their melody-powered hooks, beat-heavy songs, memorable anthems and high energy performances. Initially, Showtek launched their career in electronic music as Hardstyle DJ/producers with undeniable success. Today, Showtek is recognized as undisputed leaders within the electronic dance music genre, boasting platinum-selling, chart-topping singles heard around the world. Over the past two years Showtek has become more than an act. They’re a movement brought together by the producer duo and their fans. United by a love for music, excitement, artistic freedom and adventure.

Today, Showtek’s musical journey sees the duo moving away from their past life as DJs and into a position as bonafide producers and songwriters infiltrating the pop world. On “Believer”—released in the second half of 2016 via Mad Decent and Showtek’s own independent imprint, Skink—they join electronic powerhouse trio Major Lazer on a dubbed-out, reggae-tinged bass bomb that’s fuelled by trap influences and hardstyle rawness. For the track’s official music video, Showtek and Major Lazer partnered with Save the Children to help raise funds for and awareness of children affected by the ongoing conflict in Syria. Outside of the EDM world, their trademark production style is now clearly heard across mainstream radio and throughout the pop spectrum, like Chris Brown’s shiningly catchy “Nobody’s Perfect,” which they co-produced, and their driving remix of Carly Rae Jepsen’s “Tonight I’m Getting Over You.” Elsewhere, their latest single, “On Our Own” sees Showtek traverse through dreamy melodies, euphoric synths and a bass-driven hook as featured singer Natalie Major delivers a catchy vocal performance. As performers, Showtek has played the main stage across all the major electronic music festivals, including Coachella, Electric Daisy Carnival Las Vegas, Ultra Music Festival, TomorrowWorld, Ultra Europe, Creamfields, Lollapalooza, Electric Zoo and Stereosonic (multiple cities). They’ve also headlined the world’s top clubs and venues, including LIV/Story in Miami, Zouk in Singapore and have held residencies in Privilege/ Pacha in Ibiza as well as Hakkasan/Omnia/Drais in Las Vegas.

Now with more than 15 years under their belts, Showtek continues to develop their musical evolution and transform their diverse styles. The upcoming releases see Showtek using their multifaceted skills as producers and songwriters and highlighting their wide-spanning variety in styles. The ultimate test in modern production, their next creative phase welcomes an urban influenced, culturally inspired sound. “It’s always been one of our goals to be able to do whatever we like in music in a way where we can have artistic freedom and bring variety into our songs and work outside the box,” says Sjoerd. “We don’t want to be known for just one thing. We feel the need to grow as artists, which means we are growing as people. Our music is a translation of ourselves.”

Showtek has been mentioned in our news coverage

Showtek Interview: Switch it up a little

#DLDKUK is almost SOLD OUT

Here are the latest Showtek mixes uploaded to Soundcloud.

Do you promote/manage Showtek? Login to our free Promotion Centre to update these details.