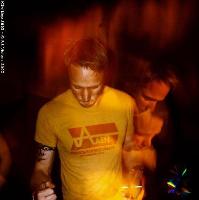 K.i.M (Joakim Fogelmark) passion for music started already at an early age, spending most his money on Metal and 70's rock records. Got his first guitar when he was 9 and started bang on a drum kit at the age of 11, and throughout his teenage years play in various bands. Got his love for Psy trance when one of his friends took him to his first party back in 93, and got completely blown away by the music and the atmosphere. But it was not in till 1999 now based in London he first got a copy of logic and between 99 to 2002 was producing Psy trance and djin in various parties around the Globe. In 2002 lot's to do with work, time in the studio was harder to come by, and he also started to produce techno and minimal house. Got a few releases throughout the years and in 2009 started to work on a album. But this was all about to change on a christmas eve 2010 in Goa

when his house was robbed and lost everything he every piece of music he ever made (even with multiple backups).

With no computer and no way of making music! The natural result is to get together with other people in the studio and what other music to be made in Goa then Trance. The year after he set up the Ratcave studio in Vagator Goa and over a six month period he wrote a bunch of new tracks and had a chance to work with lots of different producer. And K.i.M was born.

There was a few realises with Earthling in 2011 on the digital download charts but his debut ep was with grasshopper rec in feb 2012 and was extremely welled received. And this summer the hard work is paying of, having one of the main slots at Ozora, doing a live set At Voov and a second tour of Japan. With a very busy release schedule this year and a forth coming album on Zero one music the future looks very promising for K.i.M

K.I.M - Zero 1 has been mentioned in our news coverage

Here are the latest K.I.M - Zero 1 mixes uploaded to Soundcloud.

Download our app or subscribe to our push notifications to get the latest alerts for K.I.M - Zero 1

Do you promote/manage K.I.M - Zero 1? Login to our free Promotion Centre to update these details.