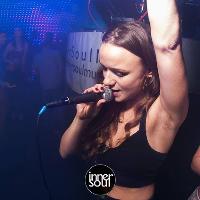 Always a writer and a fan of rhymes, J:S began her singing career featuring on hip hop beats. After studying jazz, her style developed and the confidence to scat and freestyle developed into the singsong verses you hear today. Although always a dnb head, J:S didn't fully move into drums until 2014, when a collab with Al Menos (Innersoul) earned her a spot on the mic at one of the labels infamous events.Since then, J:S has performed at a number of house hold nights and shared a stage with the likes of LSB and Phil Tangent. Her ease in switching between spitting and singing has become a trademark and one that keeps driving her growing reputation.

In July 2016 J:S had her first release with 'Spinning Around which featured on 'The Heartless EP by Mr Joseph (Fizzy). J:S continues to write and record alongside her Performance career, with aims to release more tracks in the future.

J:S hasn't been mentioned in our news coverage

Here are the latest J:S mixes uploaded to Soundcloud.

Do you promote/manage J:S? Login to our free Promotion Centre to update these details.