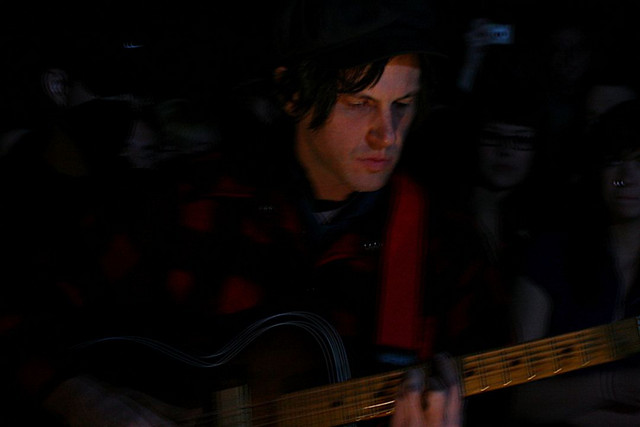 Jeff Mangum is the founder and driving force behind what was the band Neutral Milk Hotel and one of the cofounders of the Elephant 6 Collective. Rob Schneider (of The Apples In Stereo), Will Cullen Hart, Bill Doss (formerly of Olivia Tremor Control and now comprising Circulatory System and The Sunshine Fix, respectively) and Mangum all attended the same high school in Ruston, Louisiana in the late 1980's. The friends shared a passion for bands of the 60's such as The Beach Boys, The Beatles, and The Zombies, as well as an affinity for newer, noisier bands such as Sonic Youth and Minutemen. They reflected these influences in the tapes they recorded and shared with each other, forming the seeds of what would become the Elephant Six Collective. While Robert Schneider became the "popular" face of the collective with the eventual success of The Apples in Stereo, Mangum would ultimately release some of the collective's most interesting and enduringly popular music.

From the ashes of a band called Synthetic Flying Machine, Olivia Tremor Control was born, with an original line-up of Will and Bill on guitar and bass and Jeff on drums. Around 1995 Jeff decided to leave the group to focus on his own songs. A year of intensive songwriting (some of it accomplished, according to Jeff, while he was living in a haunted closet!) in Denver, Colorado with Rob Schneider at his Pet Sounds studio resulted in his debut album, On Avery Island, released in 1996, which was mostly Rob and Jeff playing Jeff's songs with a few helpful friends. Jeff eventually expanded the line up of Neutral Milk Hotel and in 1998 released what many consider the band's (and indeed, the Elephant Six Collective's) defining album, In the Aeroplane Over the Sea.

The relative success of the album in addition to the pressures of being suddenly thrust into the spotlight took its toll on Mangum, who disbanded Neutral Milk Hotel in 1998 after a tour in support of their latest album. Jeff has kept out of the public eye since then (although not without rabid fans speculating on his whereabouts), rarely if ever playing acoustic sets and concentrating more on his recorded sound and music collages. Most recently he released a compilation of field recordings of Bulgarian folk music called Orange Twin Field Works Vol. 1 in the summer of 2000, followed by a live album on the Orange Twin label, Live at Jittery Joe's. The set was recorded in 1997 and was put out to squash the exhorbitant sums that Neutral Milk Hotel live albums were selling for on eBay. The cd features a Quicktime movie of the concert performance, but Mangum is backlit and cannot be seen throughout the video.

Jeff Mangum hasn't been mentioned in our news coverage

Below is a sample playlists for Jeff Mangum taken from spotify.

Do you promote/manage Jeff Mangum? Login to our free Promotion Centre to update these details.