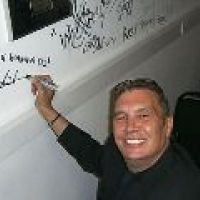 Ian Dewhirst started his DJ career in 1971 at the age of 16, with a warm-up slot at Leeds Central for Northern Soul DJ Legend Tony Banks. Following several successful weeks of "warming-up", Tony left the venue and Ian took over as resident at one of the North's most respected Northern Soul venues.

Following his success at Leeds Central, Ian started finding more and more Northern Soul U.S. imports and both his record collection and reputation started to grow. By 1972-1973 Ian secured several other residencies including weekly and bi-monthly all-nighters at Wigan Casino, Cleethorpes Pier and Sheffield Samantha's. This was during the 'golden age' of Northern Soul where Ian discovered and played such records as The Carstairs' "It Really Hurts Me Girl", The Tomangoe's "I Really Love You", Tobi Legend's "Time Will Pass You By", The Four Perfection's "I'm Not Strong Enough", Gerri Grainger's "I Go To Pieces", Lenny Curtis's "Nothing Can Help You Know", Clyde McPhatter's "Please Give Me One More Chance" and Yvonne Baker's "You Didn't Say A Word" among many others.

Following his growing disillusionment at the way that record prices were escalating and the amount he was personally being charged for "unknown" records, Ian decided to move to Los Angeles and search for Northern Soul rarities himself. So, in 1975 Ian moved to the U.S.A. and started hunting for rare up-tempo Northern Soul records. Within weeks he discovered many major rarities and new "unknown" records including Willie Hutch's "The Duck/Love Runs Out", Judy Street's "What" and literally hundred's of other records which have since become Northern Soul classics.

Ian Dewhirst has been mentioned in our news coverage

Do you promote/manage Ian Dewhirst? Login to our free Promotion Centre to update these details.