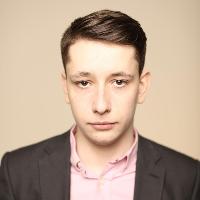 Elliot Steel is an English stand up comedian.

The son of stand-up comedian and radio and television personality Mark Steel[1] they appeared together competing against each other on Comedy Centralâs television show Roast Battle.

His first gig was at the Old Rope in London. By the age of 17 years old Steel had already performed at Latitude Festival, V festival and Reading Festival.

Elliot Steel hasn't been mentioned in our news coverage

Do you promote/manage Elliot Steel? Login to our free Promotion Centre to update these details.