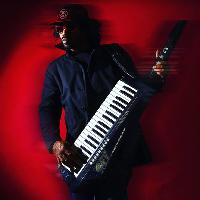 Known as Los Angeles' "ambassador of boogie funk," DâM-FunK represents the citizens of the Funkmosphere. Headquartered in the Culver City section of L.A., DâM (pronounced 'dame' as in Damon) spent the last few years cultivating a musical renaissance rooted in the early-80's styles known as boogie, modern soul and electro-funk.

As a DJ/selector, DâM-FunK attracts the most discerning boogie funk aficionados within driving distance of his storied Monday-night Funkmosphere parties. But it's not just collectors at the bar toasting to the melodic sounds. Anyone who grooves to the likes of Slave, Aurra, early Prince, Prelude Records and the like, will get a dose of those groups' unknown contemporaries – more obscure but equally funk-worthy.

The next phase of the ambassador's mission: continuing the classic West Coast tradition into today's scene with DâM's own original "modern-funk" compositions. By plugging in his arsenal of vintage synths and drum machines, DâM channels the galactic harmonies of his inspiration into his own brand of new boogie. Stones Throw Records' like-minded honcho Peanut Butter Wolf brought DâM on to the team to glide into the future with his unique, synth and bass-driven vibe. It's a promising new chapter for Southern Cali space funk.

DâM FunK hasn't been mentioned in our news coverage

Do you promote/manage DâM FunK? Login to our free Promotion Centre to update these details.