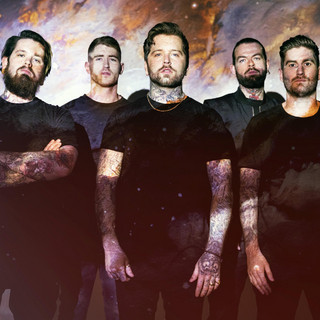 Get more information about Bloodstock 2022 including festival tickets, news, reviews and lineups.

With a sound that merges the plaintiveness of post-hardcore with the punishing heaviness of metalcore, Bury Tomorrow attack listeners from all fronts with their emotionally charged metal assault. Offsetting layers of pleasant, atmospheric melody with sudden bursts of chugging heaviness, the band uses its breakdowns to create a brooding, moody effect, as if the songs are lurching into a fit when provoked from their somber ruminations. Formed in 2006 in Hampshire, England, by bandmembers Jason Cameron (guitars/vocals), Daniel Winter-Bates (vocals), Davyd Winter-Bates (bass), Mehdi Vismara (guitar), and Adam Jackson (drums), Bury Tomorrow wasted no time bringing their sound to the people, self-releasing their first EP, The Sleep of the Innocents, in 2007. Portraits, their full-length debut, appeared two years later on Basick Records, and was followed quickly by another EP, On Waxed Wings, in 2010. Bury Tomorrow caught the attention of famed metal imprint Nuclear Blast, and in 2012 they signed on with the label, releasing their sophomore effort, The Union of Crowns, later that year. The following year saw the departure of founding member Mehdi Vismara and the arrival of new lead guitarist Kristan Daweson, who would appear on 2014's Runes. Earthbound, the band's fourth studio long player, arrived in 2016.

Bury Tomorrow has been mentioned in our news coverage

Dr.Martens announce more headliners for Stand For Something Tour

Below is a sample playlists for Bury Tomorrow taken from spotify.

Do you promote/manage Bury Tomorrow? Login to our free Promotion Centre to update these details.