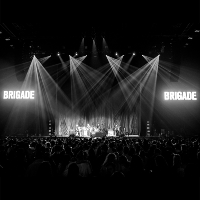 Frequently, bands get back together with dodgy motivations or to underwhelming results. Sometimes, though, they come back stronger, more compelling and completely reinvigorated.Following on from their 2011 break-up, UK quintet Brigade definitely fall into this latter category with their new EP, ‘This Is Not For You’. The five-tracker is the most acerbic, riff-ridden work of their career – boasting a darker edge than previous material and a nuanced stylistic shift while retaining everything that made them great in the first place. “I think we’ve taken what we did with Brigade and we’ve turned it up a notch,” says frontman Will Simpson. “We’ve gone bigger with the riffs, with the tuning we’ve stepped down the guitars further. There are more complex arrangements and we tried not to think about things we thought about in the past – like how songs work for radio. It’s just bigger, riskier, and more aggressive.”

To recap, Brigade were among the many British bands that broke out in the noughties but never quite hit the heights their quality deserved in a weird, transitional era. Their soaring, melodic rock songs nonetheless left an indelible impression on their fans and garnered rave reviews and award nominations from the likes of Rock Sound, Kerrang! and the NME.

Across three albums – 2006’s ‘Lights’, 08’s ‘Come Morning We Fight’ and 2011’s ‘Will Be Will Be’ – they built up a back catalogue to cherish, while touring with the likes of Biffy Clyro, and signing to Roadrunner Records in Japan. Like all good things, it was a run that came to an end seven years ago – but in the background over the intervening time, the core of the band never stopped exercising their songwriting and recording chops. Through the post-break-up project More Dangerous Animal, Will and guitarist James Plant – flanked by fellow guitarist Mark Fisher, bassist Alex Baker and original Brigade drummer Fim – indulged the opportunity to challenge themselves and explore slightly heavier avenues. Taking a more low-key, hobbyist approach to making music – away from day jobs that range from farming to TV production and healthcare – brought a raft of new ideas to their writing.

Brigade has been mentioned in our news coverage

Win two tickets to both days of London Remixed Festival

Below is a sample playlists for Brigade taken from spotify.