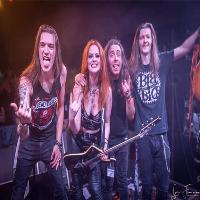 Beth Blade and The Beautiful Disasters are a Melodic Hard Rock band from Cardiff South Wales. The four-piece provide monster riffs, huge choruses and a dose of old school rock and roll attitude. With aggressive muscle and melodic sensitivity, this band are reigniting the flame of British classic rock. They have an unmistakable modern presence whilst keeping the spirit of old school rock and roll alive. Known for their loud, ballsy and interactive live shows they are destined to show you a good time; they are ready to make their mark anyway, anywhere & anyhow.

In 3 years the band have been a non-stop force to be reckoned with. Having supported Ricky Warwick and Damon Johnson of Black Star Riders twice (being invited back the second time by request) and completed two full UK tours with Marco Mendoza (Thin Lizzy/Whitesnake/The Dead Daisies) the band got a taste for the road.

The band's debut album 'Bad Habit' has been well received in the rock press. Recorded at Monmouths famous Rockfield studios and produced by Nick Brine (Thunder, The Darkness, The Amorettes) and Mastered by Pete Maher (The Rolling Stones) it has been favorably reviewed in Classic Rock Magazine, Power Play, Fireworks and many more throughout Europe. Classic Rock Magazine critics named it in their 'Top 50 Albums of the year so far' landing at #17 in the Top 20 voted for by the public, a list that included the likes of Thunder, Deep Purple, Black Star Riders and Cheap Trick. The band have no intention of stopping and continue to raise the bar with a fierce determination, intense live performances and a passion for rock and roll that is unrivaled.

Do you promote/manage Beth Blade & The Beautiful Disasters? Login to our free Promotion Centre to update these details.