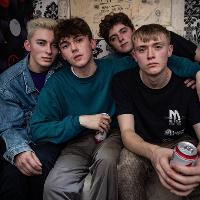 Among The Citizens tickets and 2020 tour dates

The Lending Room in Leeds

The Engine Shed in Lincoln

Among The Citizens are a 4 piece indie/alternative band based near Peterborough, UK. The band have collaboratively created their own distinct sound from a blend of influences such as The Cure and Echo and The Bunnymen with their dreamy, infectious chorus guitar, as well as contemporary artists such as JAWS with their lush and memorable synthesiser/guitar melodies. In more recent years, they have enjoyed the west coast pop scene listening to bands such as HUNNY and Bad Suns.

Among The Citizens have supported the likes of Bloxx, Childcare, Valeras, Gaffa Tape Sandy and Redfaces to name a few.

2019 has seen the band included on the Big in 2019 list published by respected promoters This Feeling in association with Fred Perry Subculture. Their first single release of the year Next Time received critical acclaim and was backed up by a Spring UK tour. The summer saw the band play showcases in association with Louder Than War at The Great Escape, support Jaws and Easy Life at 110 Above Festival and open for Gengahr at Cambridge Junction. Their latest single In Your Car, released in October was produced by Jon Hucks (Spring King/False Heads) and mastered

Among The Citizens News

Among The Citizens hasn't been mentioned in our news coverage

Among The Citizens mixes

Here are the latest Among The Citizens mixes uploaded to Soundcloud.

Among The Citizens videos