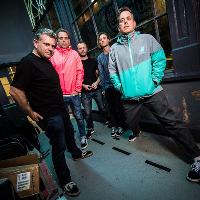 They formed in 1995 in Suffolk, England. The original line up was the three brothers: Jason Perry (Vocals), Adam Perry (Drums) and Giles Perry (Keyboard), with two friends Mark Chapman (Guitar) and Steve Swindon (Bass). Swindon quit the band in 1997 and was replaced by Daniel P. Carter.

After changing their name from 'Grand Designs' and abandoning their early progressive-inspired sound for a more punky feel, they released their dÃ©but album "How Ace Are Buildings" in 1997.

The second album; "A vs. Monkey Kong", followed in 1999. Monkey Kong was a more poppy record than How Ace Are Buildings and the band toured the world, played festivals and enjoyed a small degree of success worldwide, especially in Germany.

A (UK) hasn't been mentioned in our news coverage

Do you promote/manage A (UK)? Login to our free Promotion Centre to update these details.