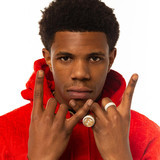 An MC perfectly styled for the age of Future and Desiigner, Bronx rapper A Boogie wit da Hoodie hit the scene in 2016 with a funkier version of trap rap. Born Artist Dubose in Highbridge, the Bronx native spent some time in Florida before returning home and taking his music seriously. That was 2015; in early 2016 he uploaded his first tracks to the Net. In March, he dropped his debut mixtape, Artist, while April saw him drop "Bag on Me" featuring Don Q. With a Meek Mill and DJ Khaled co-sign soon after, and the Highbridge the Label mixtape released in May, the Atlantic label signed a deal with Highbridge and issued the singles "Bando" and "My S**t" in July. EP TBA followed in October. At the start of 2017 Boogie was featured in XXL's Freshman Class Of feature. Later the same year, he released his debut full-length, The Bigger Artist, which was packed with guests, including appearances from Trey Songz, Chris Brown, Kodak Black, and Robin Thicke.

Here are the latest A Boogie Wit Da Hoodie mixes uploaded to Soundcloud.

Do you promote/manage A Boogie Wit Da Hoodie? Login to our free Promotion Centre to update these details.