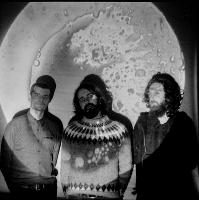 10,000 Russos are a formidable force within modern psychedelia; their industrial psych/post-punk has been charming fuzz-heads across the globe with its stomping, shamanic mantras and otherworldly krautrock slant. Following their debut album and recent split with The Oscillation.

10,000 Russos have once again transcended the boundaries of psychedelia as we know it today; their dark, droning noise is twisted, distorted and pushed to its limit. ‘Distress Distress’ is so ritualistic and industrial it see’s their usual post-punk sound – a primal and celestial mix of The Fall, NEU! and Spacemen 3 – pushed within an inch of techno territory with its abrasive, metronomic rhythms.

10000 Russos hasn't been mentioned in our news coverage

Do you promote/manage 10000 Russos? Login to our free Promotion Centre to update these details.