Kanteena presents Wrong Jovi 'the best Bon Jovi tribute band in the world' on Saturday 7th January 2023 in Lancaster! A night not to be missed!

Are you ready for ‘One Wild Night’ of Bon Jovi hits, live favourites and rarities? Wrong Jovi will transport you back to the days when Bon Jovi were the best live act on the planet and transform Kanteena into a stadium for the ultimate Bon Jovi tribute show.
Wrong Jovi are widely considered to be “the best Bon Jovi tribute band in the world!” So much so, that former Bon Jovi guitarist, Richie Sambora, has personally thanked the band for their hard work and unforgettable performances.
In their 7 years of touring, the band have performed hundreds of times around the world, featured on BBC prime-time TV, sold out music venues and theatres across the UK and headlined festivals in Malta, Abu Dhabi and Bahrain … as well as back home in the UK - including a headline slot at the Isle Of Wight Festival.
All prepped to perform a set of greatest hits, live favourites and rarities, the band ensure that there is something for the casual follower and even the most die hard of Bon Jovi fans!
- - - - - - - - - - - - - - - - - - - - - - - - - -
Then if you still need ‘Something For The Pain’ stick around for the after party, and you’ll get Saved By The 80’s. We’ll keep those nostalgia vibes high and have you singing and dancing till the early hours. 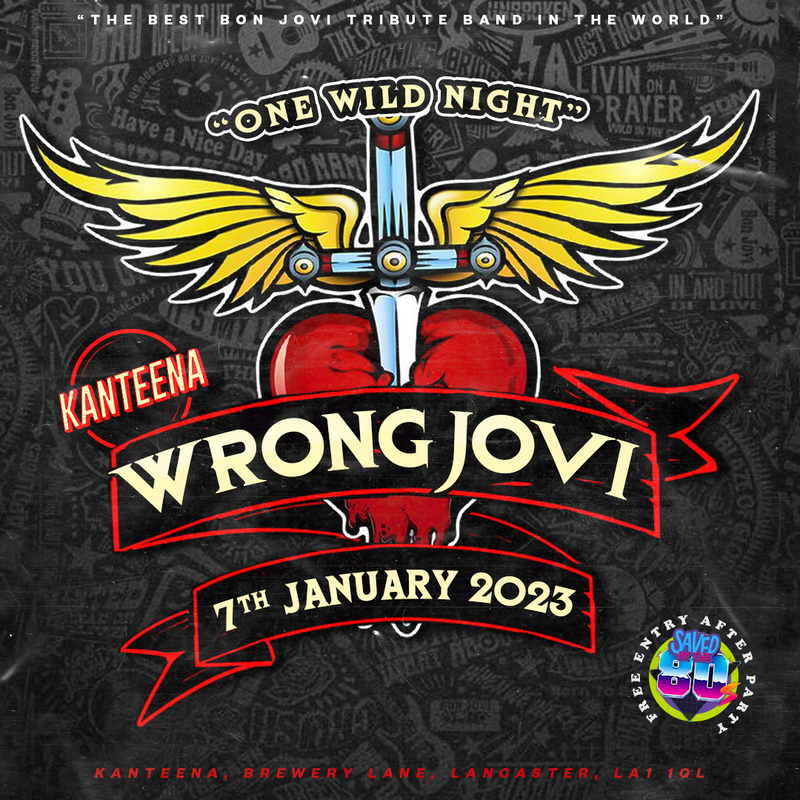 This event has Covid secure measures in place

Staff follow all safety protocols as directed by local authorities

Use of cleaning chemicals that are effective against Coronavirus

Need a place to stay? Compare every available hotel deal and Airbnb near Kanteena, so book today to secure the best price!.