Thin geezer, fat tunes: Micky?s a proud entertainer. No chin scratching, no anoraks, no mean n? moody bullshit; just proper, wholesome fun. Revisit any of his mixes or releases from the last 25 years ? especially the hugely influential bassline-heavy Urban Shakedown material with Aphrodite ? and you?ll hear his sense of musical mischief instantly. That intoxicating party spirit that brought us to drum & bass in the first place; Micky?s never lost focus of the free-for-all creativity, the audacious low-end cheekiness, the unashamed vibes.

Naturally, he takes this fun seriously. Whether he?s behind the decks or, more recently, behind the desk, he?s something of a card carrying perfectionist. As co-owner of premier talent hub the Urban Agency, he takes pride in developing his company?s talent-touting roster. As a label manager he ensured the output on his imprints Urban Shakedown, Urban Takeover and Finn People was an essential staple of all the biggest DJs. And as a promoter he?s chapters ahead of the rest? His Sunbeatz rave holiday package concept drove drum & bass to Ibiza several years long before the current wave of white isle bass takeovers.

Business-aside, Micky?s still very much the entertainer; having teased floors with his incendiary selection since 1987, DJing has taken Micky around the globe many times over? Often by private jet. From the US to the Ukraine, Brazil to Bulgaria, there?s no territory he hasn?t smashed a dance in. Now, with more business commitments, the slots on Micky?s schedule are strictly limited and are highly sought after from promoters in every corner of the drum & bass loving world.

You?ll be pleased to hear he?s been seen lurking around the studio again too. His collaborations with Majistrate and Erb N Dub over the last five years have refuelled his passion for wholesome, bass-charged production mischief, and he?s back behind the mixing desk with his long term partner in grime Aphrodite. With several very special projects lined up for the near future, Micky?s still very much the entertainer? And still very much at the forefront of the scene he?s helped shape.

K-Klass are responsible for some of the biggest dance tracks ever made. For over quarter of a century they have rocked dance floors and live gigs without fail, racking up no fewer than 5 UK top 40 hits and a GRAMMY Nomination along the way. That combined with a remix Hit List to die for, including Janet Jackson, Whitney Houston, Lisa Stansfield, New Order,Bobby Brown, Rihanna and many, many more all adding up to millions of sales/Internet views world wide. Meeting in 1988, in the Legendary Manchester club, the Hacienda, K-Klass soon teamed up with vocalist Bobbi Depasois (who they work with to this day). Hits such as 'Rhythm is a Mystery' and 'Let Me Show You' soon followed. In the early days the group were best known for their live performances, notching up over 300 full live shows. They cut their teeth playing live at huge raves as well as iconic clubs such as The Hacienda, Cream, Ministry of Sound and many others. Offers of remix and production work followed the hit records. In 1995 K-Klass won the International Dance Awards Remixer Of The Year Award, then followed that in 2002 with a GRAMMY Nomination. The 44th annual Grammy's saw K-Klass nominated as the first UK artist ever in the best remix category. To this day K-Klass continue to rock dance floors across the UK and world wide. Showcasing both upfront and classic house music in their sets. Alongside DJ ing live, K-Klass also syndicate a monthly ?Klass Action? Radio show to over 100 fm/internet stations worldwide. Klass Action, K-Klass? record label was set up in 2012 alongside former Stealth records label manager Bas Jansen. So far the label has scored successful top 10 releases on both major dance music download stores Beatport & Traxsource working alongside Todd Terry, Jorge Montia, Benny Royal, Martijn Ten Velden, Sonny Wharton and Futuristic Polar Bears, as well as including their own remake of K-Klass ? Let Me Show You 2015.

2013 Saw K-Klass celebrate 25 years in the business. This was marked by the release of the hugely successful K-Klass 25 album and tour, showcasing 25 years of the band's work. The album went top 10 on iTunes Dance and reached No. 8 in the HMV Physical sales chart. 2015 also saw K-Klass take the full live band back on the road with a series of very successful live shows that included the Beat-Herder Festival, Bowlers Arena, Manchester and Air Festival, Bournemouth amongst others. The K-Klass Live band includes Davos (keys) and Pav (percussion) who join Bobbi, Russ and Paul on stage to make it a truly live affair

You can?t talk about UK dance culture without mentioning Ashley Beedle. He?s done it all. And he?s still doing it. A true polymath, it?s harder to find an element of good music that this Bajan-British legend hasn?t been involved in. A DJ, producer, remixer, label owner, re-edit king, he?s been fighting the cause for the good groove since his musical career began in earnest in the ?80s. For Ashley, notions of genre mean little. He?s got a deep knowledge of every style under the sun. Be it house, hip-hop, reggae, punk, symphonic soul or raunchy ?70s rock, what matters more is if it sounds right ? has the passion, intensity, funk and flavour to light up an Ashley Beedle DJ set.

Foremost an aficionado of funk, disco and house, his first forays into production got him noticed, with house/garage classics like ?Give Me Back Your Love?co-produced in 1988 as part of Boyz In Shock, or the later neo boogie explosion ?New Jersey Deep? with Black Science Orchestra making huge dents in dancefloors. But he?s also cut blissful drum & bass with Ballistic Brothers (?I?ll Fly Away?), techno with former protégé and Hollywood film soundtracker David Holmes as Disco Evangelists (?De Niro?), even proto-dubstep as Jamayka Boys (?Rastaman?). In love with all (quality) music, his productions have been a characteristic blend of his many influences, a patchwork reminiscent of his famously diverse DJ sets, which he continues to perform all acrossthe globe. Best known as part of pioneering house team X-Press 2, Ashley hit big with house classics ?Muzik X-Press? and ?London X-Press? and later, with former Talking Heads singer, the incomparable David Byrne, ?Lazy?, which smashed the charts in the US (No.1 in the dance chart) and UK (No.2 national chart). Ashley?s crafted Afrobeat electronics as Black Jazz Chronicles, soundsystem dancehall and hip-hop as Warbox, cosmic krautrock flavours as Ralph und Beedle alongside Mark Ralph of Filthy Dukes, country-soul as Mavis with folk like Lambchop?s Kurt Wagner and gospel-soul hero Candi Staton, and an incredible hook-up with reggae crooner Horace Andy for a whole album in the ?Inspiration Information?series for Strut. Mr. Beedle?s had his hand in more than a share of compilations too. The last one, ?Grass Roots?? held in high esteem by fellow DJs and fans ? saw him delve into those dusty vinyl shelves to uncover a list of personal favourites, with everything from jazzman Freddie Hubbardand soul don Willie Hutch to obscure hip-hop unit Son of Bazerk and Balearic disco fave Will Powers.

Ashley?s Yardism ? for the first time using his own name ? is a series of rough, raw and bashy house EPs, ?Yardism?, on Toddla T?s Girls Music imprint. Inspired by the new school of sub-injected house music in the UK, he?s taken shards of funky, garage and soundsystem bass vibes and refracted them through his unique production prism, attracting a fresh audience. The latest installment of ?Yardism? sees Ashley collaborate with versatile ?Neighbourhood? producer Zed Bias, while his galactic disco project Darkstarr, with The Loft/Classic Album Sundays? DJ Cosmo and diverse house heads Yam Who? goes from strength-to-strength, fresh off the back of an epic remix of NYC punk funk maestros The Rapture.

Remixing and re-editing is another key part of Ashley?s formidable skill set. As well as a formative early 1990s collabo with DJ Harvey re-editing The Police?s disco deviation ?Voices Inside My Head?, and a super-hit in his 2003 funked-up reform of Elton John?s Philadelphia soul tribute ?Are You Ready For Love??he?s put out club-ready versions of tons of disco, house, Balearic and funk cuts under monikers like Heavy Disco Revue, Afrikanz On Marz and Yambee (with Yam Who?), on a succession of his own labels. The most recent of which, Modern Artifacts, has been very active since its birth in 2010 with version excursions on everyone from Curtis Mayfield to Kate Bush, and most notably the zero-gravity cosmic lament of his re-lick of the sadly departed Gil Scott-Heron?s ?New York Is Killing Me (Ashley Beedle?s Space Blues Rework)?. There?s been more brilliant remixes of music giants, too, including a wicked version of Bob Marley & the Wailers? evergreen ?Get Up Stand Up?? which saw the original vocal ride a dubbed out skank using portions of Damian Marley?s modern dancehall classic ?Welcome to Jamrock?, and got the official seal of approval from the Marley family as well as a Jamaican release via Tuff Gong ? and a rare, official remix of the Rolling Stones (?Rain Fall Down?), that garnered praise across the board. And who can forget those classic remixes of The Streets??Weak Become Heroes? Manic Street Preachers??Roses in the Hospital? (his first big official remix), or Bent?s ?Always?? These remixes and particularly, special re-edits play a key part in Ashley?s DJ sets. In the grand tradition of DJs that go the extra mile, each set from him is largely composed of fresh re-rubs and club-ready tweaks, tunes that are often cut exclusively for that particular appearance, dubplate fashion. For him, it?s not just playing tracks; his personality and passion is poured into each appearance, making it more like a set of his own productions than a standard DJ set.

MESSAGE IN THE MUSIC

The latest example of his masterful reshaping talent is Harmless? new collection, ?Message in the Music: The Ashley Beedle Edits?. Compiled, mixed and with additional production from Ashley, it gathers two CDsof rare and classic cuts of all styles and genres ? everything from Cymande and MFSB to Family and Al Green ? all given a distinctively Beedle-esque re-spray to make them work for today?s floors. Producing for other artists is yet-another string to his bow. Having lent his considerable studio abilities to great vocal talents like Shara Nelson and Gabrielle, he?s currently working with the Latin guitar genius behind classic covers like ?Golden Lady? and ?California Dreaming?, Jose Feliciano. And his DJing ? the thing that started his career on his inimitable path ? continues on unabated, across the UK, Europe and beyond, while a series of much-anticipated new albums through his Back to the World label are being completed, including Afrikanz on Marz, an album with an incredible singer songwriter, Waterson and rumours of a new Black Science Orchestra reunion project are underway... It seems there?s little Ashley hasn?t already done, then. But he?s bound to keep surprising us. 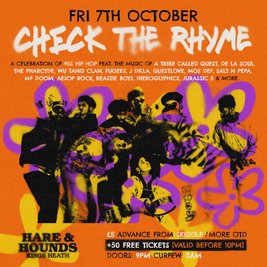 Check The Rhyme at the Hare & Hounds on Friday, October 7th for a night of 90s Hip Hop! 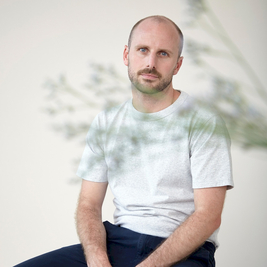 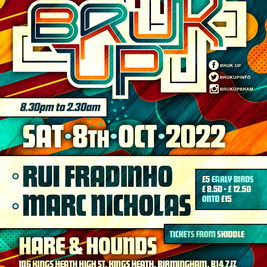 Bruk Up the October Edition

Bruk Up the October Edition

We return with our Bi Monthly Broken beat night. 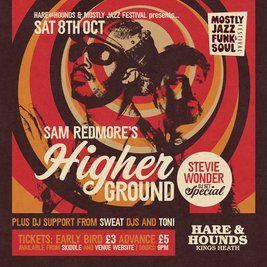