Huge acts, amazing locations and the best crowds in the world... nowhere does festivals quite like the UK

It's that time of year, when the festival line-ups begin flying at you thick and fast.

Which is why we've gone to the effort (and it has been a fair effort) of putting together a list of the best British summer music festivals below.

Whether because of brilliant line-ups, impressive productions or atmospheric locations, the festivals featured below are there for very good reason - because we love 'em.

Beginning life as a club night and co-founded by superstar DJ duo Groove Armada, this three-day rap, grime, RnB and dance festival has grown to become one of London's most popular music events, welcoming 50,000 people through the Gunnersbury Park gates each day.

Consistently featuring some of the most exciting acts in the world, previous headliners include the likes of Chance The Rapper, Solange, Childish Gambino and N.E.R.D..

2020's line-up is no less impressive, with hitmakers Disclosure, mercurial British singer/songwriter FKA Twigs, and Grammy Award-winning Anderson Paak all on the bill. 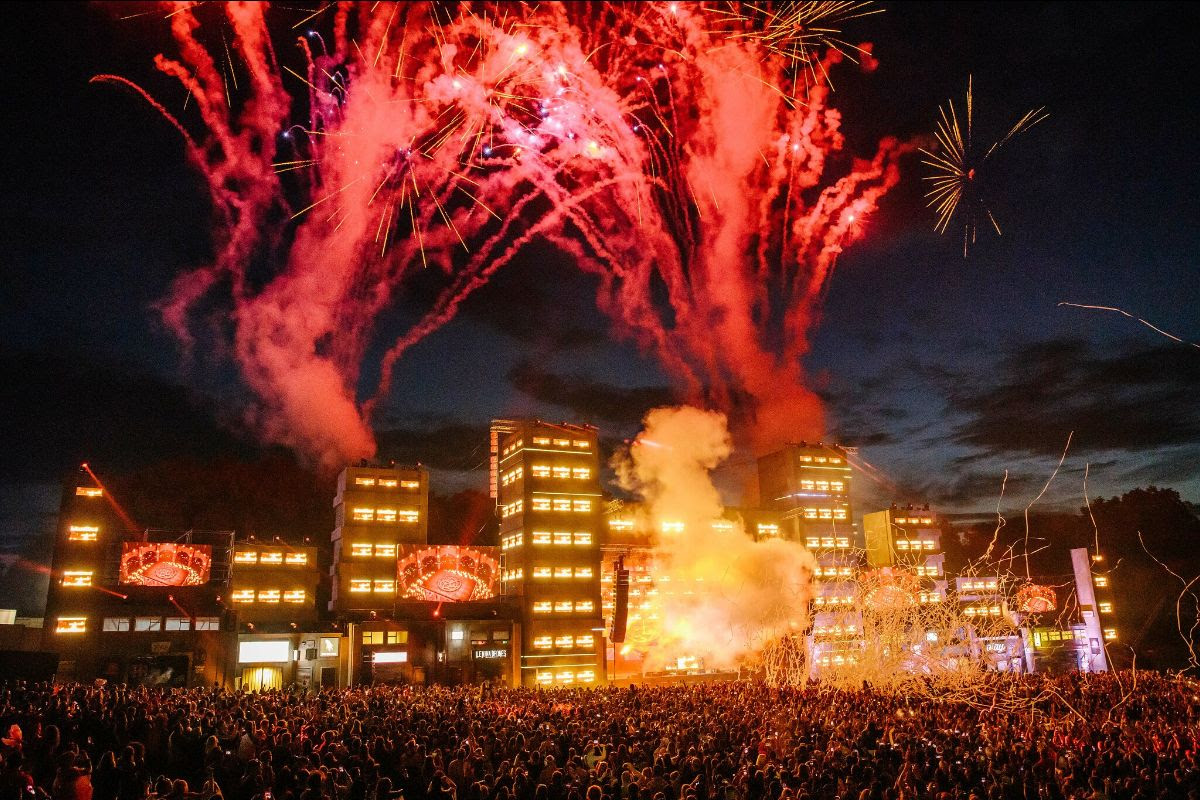 Celebrating their tenth anniversary this year, the Parklife organisers have really pulled it out of the bag for 2020, curating one of the summer's most impressive and diverse festival line-ups.

Pulling in some of the biggest and most exciting names in electronic, hip-hop and pop music over two days, Parklife 2020 will feature over 100 performances across a dozen stages in Heaton Park, from the likes of influential US singer, rapper and producer, Tyler the Creator, UK rap innovator Skepta, Scottish crooner Lewis Capaldi, US megastar Khalid, BRIT Award winner Jorja Smith and Swedish pop icon Robyn.

#regram @taylorswift ã»ã»ã» Iâm ecstatic to tell you that Iâll be headlining Glastonbury on its 50th anniversary - See you there! ð

What is undoubtedly the world's most renowned and largest greenfield music festival, Glastonbury will celebrate a very special birthday this June.

Situated in the Somerset countryside, occupying 900 acres of land, the epic festival of music and art featured more than two thousand live performances over 79 stages in 2019.

This year, to mark its half centenary, festival organiser's have brought together three of the biggest names in world music: Paul McCartney, Taylor Swift and Diana Ross. Also rumoured to be playing in 2020 are Guns 'n' Roses, Madonna, Arctic Monkeys, Ariana Grande and pretty much every other musical act in the world.

Have you signed up to the link in our bio? You'll be the first to hear news and updates about #HighestPoint2020 ðâ  -â  There's also still time for you to enter our Facebook competition to WIN a pair of tickets... head to our Facebook page for more information. â  -â  #musicfestival #lancaster #williamsonpark #summer2020 #house #disco #indie #funk #rock #grime #techno #classichouse #dnb #family #rave #festival #may2020 #win #competition

Lancaster's largest music festival will return for its third year this May, with its biggest line-up to date.

Welcoming over 20,000 ticket holders across three days in 2019, the festival, situated beneath the stunning Ashton Memorial in Williamson Park, has seen performances from a long list of legends including Sister Sledge, Grandmaster Flash, The Zutons and Feeder.

With international hitmakers Rag'n'Bone Man and Rudimental (DJ) headlining in 2020, the North West festival continues to go from strength to strength.

Well what can we say! #Bella2019 has been awesome ðð ð€©To each and every one of you THANK YOU from the bottom of our Bella hearts for making this our best so far. â€ïž We have laughed, danced, sung & partied until we can party no more. ð€ðžðº See you in 2020. Love Team Bella x ðx . . . . . . #bella2019 #bellafamily #thankyou #musicfestivals #homegrowninthehighlands #visitscotland #untilnextyear

A festival which prides itself on its inclusivity and a stunning highland backdrop, Belladrum Tartan Heart Festival has become one of the most popular annual music gatherings in Scotland.

Combining big main stage acts with a welcoming family atmosphere, Belladrum continues to sell out year-after-year. Having previously attracted the likes of Elbow, Lewis Capaldi and Paloma Faith, this year's headline act, Nile Rodgers & Chic, could be the most popular yet.

Memories of @dj_seinfeld last Summer at @campandfurnace ... whoâs going to be in there this time?..

Taking residency in the live music spaces of Liverpool's trendy Baltic Triangle in May, the Baltic Weekender is a collaborative festival from the teams behind 24 Kitchen Street and Abandon Silence.

Returning to its new home at Drumsheds in Meridian Water this July, Field Day festival organisers are continuing to push the focus onto electronic acts to compliment the warehouse venue.

Showcasing a bill of visionary and world-beating DJ/producers, the one-day dance festival boasts over 20 artists for 2020, including an exclusive headline set from celebrated production duo Bicep.

Returning for his fifth year, Adam Beyer has become as much an icon of Junction 2 as The Bridge itself. In 2020, itâs business as usual as he once again heads up the Saturday.

Hidden within an area of natural beauty and built to coexist with the contrasting industrial features found in Boston Manor Park site (including a whopping great road bridge), the electronic, techno-driven Junction 2 festival promises attendees a wealth of world-renowned artists, appearing on state-of-the-art stages, surrounded by enchanting rivers, fields and woodland.

With the likes of Adam Beyer, Amelie Lens, Four Tet and Maceo Plex scheduled to appear in 2020, Junction 2 is a must for electronic music fans in the South. 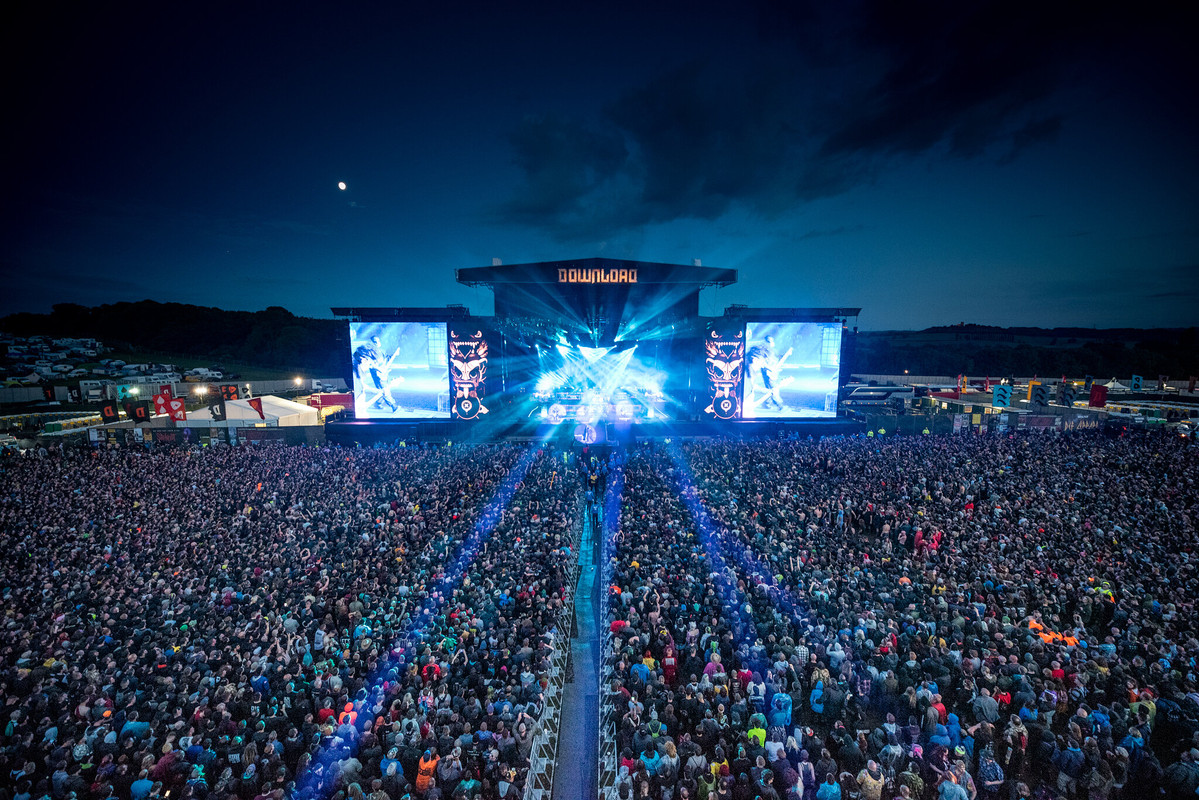 Lineup: Kiss, Iron Maiden, System Of A Down, Korn, Deftones...

A favourite amongst rock fans, Download was born from the ashes of the legendary 'Monster's of Rock' event, and remains the UK's heaviest festival.

Taking place on Derby's Donington Park race circuit over three days, Download continues to draw some of the biggest names in global rock and alternative music, having previously hosted the likes of Marilyn Manson, Iron Maiden, Metallica, and Black Sabbath, to name a few. 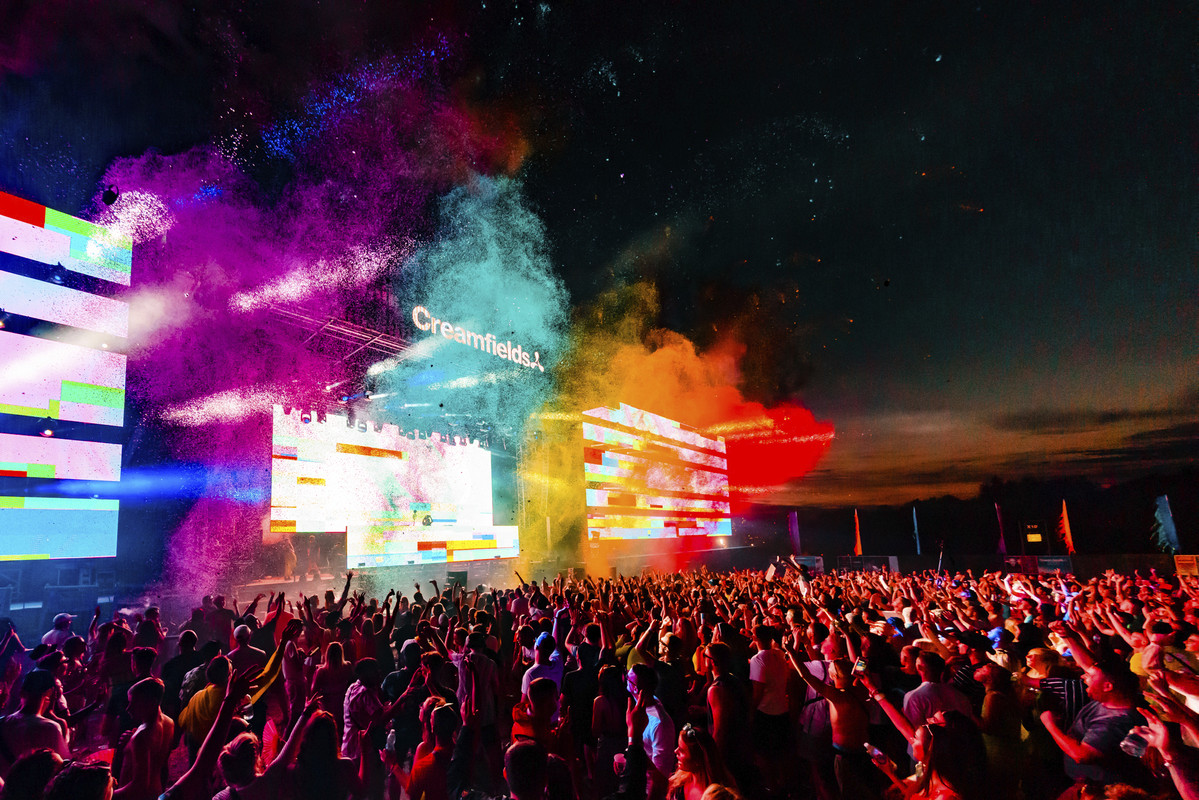 Easily one of the world's largest and most famous dance music festivals, Creamfields returns for its 15th edition on August Bank Holiday weekend.

The multi-award-winning event, which attracts a whopping crowd of 70,000 electronic music lovers, draws the biggest names in the game every single year, from the likes of Carl Cox to Calvin Harris and Eric Prdyz.

Combine the hugely impressive line-up with ground-breaking production and a notoriously up-for-it crowd and you've got one of the most impressive and important musical gatherings in the world.

Another August Bank Holiday festival, this time taking place on London's Clapham Common, is SW4 (or South West Four) festival. The two-day event returns to the capital this year following its sold out 15th anniversary edition in 2019.

Known for regularly bringing together some of the most sought after names in dance, hip-hop, drum n bass and afrobeat to one of London's most famous parks, up to 60,000 festival-goers will lap up performances from the likes of The Streets, Kano and Major Lazer. 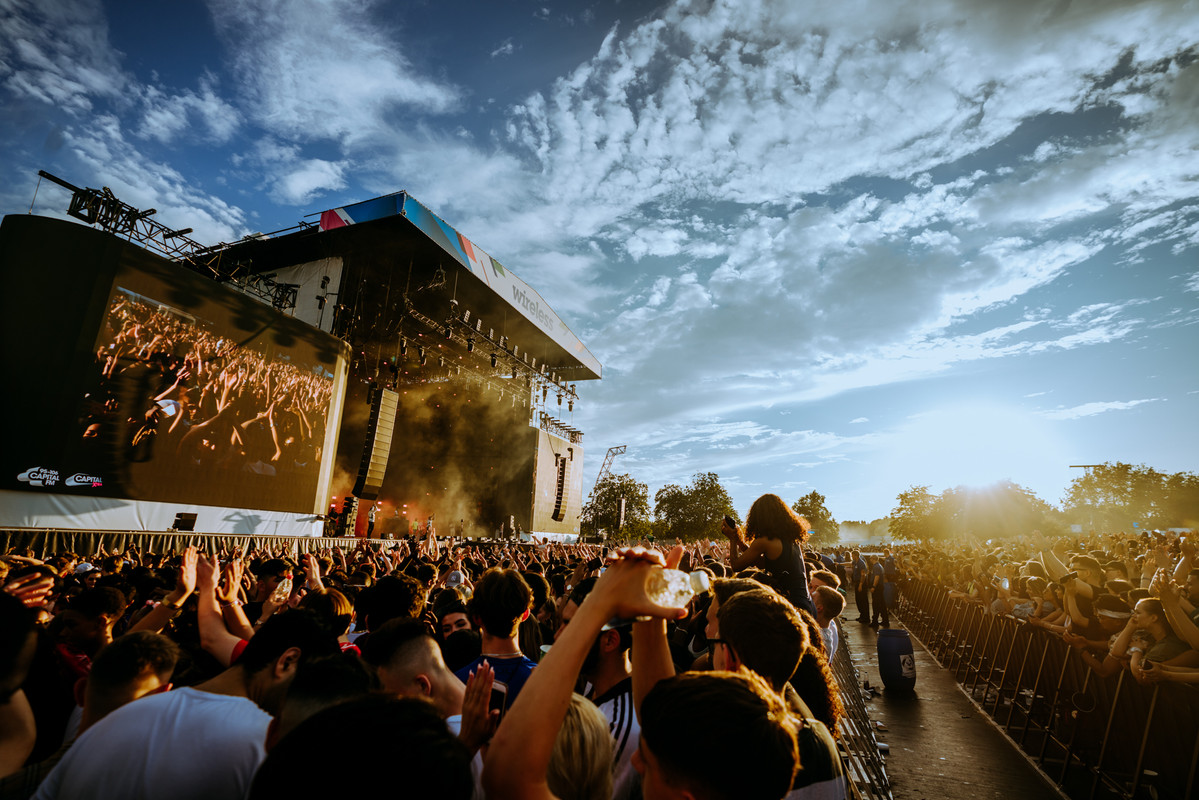 From championing local talents to introducing international superstars to new audiences, Wireless Festival and its team of dedicated organisers continues to uphold its reputation as a major trendsetter amongst its rivals.

Having previously attracted names such as Jay Z, Drake, Rhianna and Kanye West to London's Finsbury Park, this year organisers are banking on the pulling power of a homegrown headliner, UK grime innovator Skepta, alongside international stars ASAP Rocky and Meek Mill. 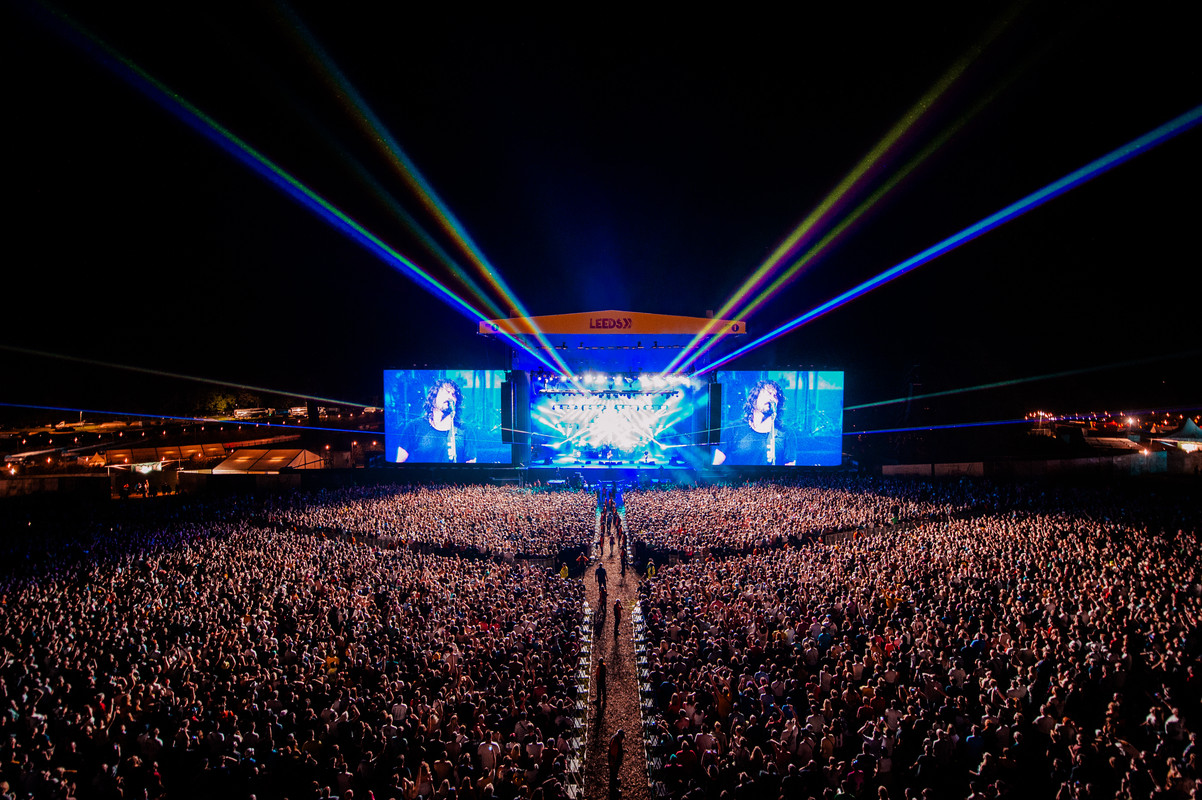 Two festivals happening simultaneously over the same Bank Holiday weekend in August, hosting some of the biggest and most-celebrated names in world music from a diverse spectrum of genres.

From punk and metal to rock, alternative, indie, dance and electro, both festivals cater to their eclectic following, with something to whet each individual's taste. Attendees this year can expect to see world class performances from the likes of Rage Against The Machine, Stormzy, Liam Gallagher, Courteeners, Aitch, Slowthai and more, across a multitude of big top and open air stages.

Celebrating the festival's fifth birthday, Forbidden Forest returns to the entrancing woodlands of Bourne’s Wild Oaks Forest this May. Consisting of a series of unparalleled parties for hardcore ravers, the festival is a celebration of underground bass, house and techno.

Removing the constraints of a traditional clubbing experience, this unique festival heads deep into the wilderness, promising its faithful fanbase a day of unrestricted hedonism.