With one of the most intriguing band names for a long time, We Were Promised Jetpacks arrived on the music scene to critical acclaim when they supported label mates Frightened Rabbit on tour last year.

With one of the most intriguing band names for a long time, We Were Promised Jetpacks arrived on the music scene to critical acclaim when they supported label mates Frightened Rabbit on tour last year. They justified the attention with the recent release of their debut album, These Four Wall. It's insistent rhythms strike a delicate balance between balls-out rock and tender longing. It's quite an achievement for such young lads. Skiddle spoke with bassist Sean Smith after a storming set at Wicker Man festival 2009.

What place does the artist, or band, fulfil in today's society?
That's a bit deep. It's to entertain isn't it? Everyone is scraping about. Even bands I know who are doing really well but they're still living at their Mum's. We've all just moved back home as well.

How are you finding that?
Three of us were staying in Glasgow and the other one was staying in Stirling. Then the lease ran out on our flat and we were like, nah, we're going on tour for two or three months quite soon'. So there was no way we could afford to keep paying the rent.

Where you going on tour?
We're going to Europe first and then we're off to America.

What are looking forward to seeing most in America? It's quite a big tour so you'll be there a while?
The size of it is getting ridiculous. It's like five weeks. Last time we only did New York and Texas. And they were both great. To be honest I don't just want to say, New York,' but Adam's [lead singer] brother knows a good group of folk there. And when we went there last time we all met up and they took us to some amazing places. I think we were there for five days last time, and we only played one gig, so it was basically a wee holiday we had really.

Are you all 21 this time and therefore of drinking age?
Yeah, yeah we are. Three of us will be 22 by the time we go.

Did you enjoy playing T in the Park recently?
It was great but it's a big thing isn't it; your first T in the Park? We tried to relax, and we were all feeling good, but we had so many problems onstage with guitars cutting out, and breaking strings, it was difficult to stay relaxed. But tonight [at Wicker Man] this festival seems so good; so chilled out. I would love to come back here just to go to the festival.

Is singing about political wrongs in the world any more important than singing about broken hearts and lost love? I think, to be honest, I'm not sure. I mean I know lyrics are very important but I'm not big on political songs at all. I like nice songs that you don't have to read into too much.

Who writes the songs?
Adam writes all the lyrics.

Where do they come from? Do they have certain themes and what are they inspired by?
I wouldn't say drugs or niceness. He writes about little things that get to him and that he thinks mean a lot. He doesn't write too much about politics or anything like that. He writes about what he feels; nothing too major. He's got good lyrics and he tries to get us to help him, and we try, but its one person's lyrics and it's hard to get into that. It's quite personal.

Is it annoying that whenever the press writes about you they compare you to your label mates Frightened Rabbit and The Twilight Sad or is it helpful?
Oh my god, I'm so glad you asked that. We've been kinda of saying that. It's really hard because Frightened Rabbit and Twilight Sad, at one point in my life, were my favourite two bands; of all time. You go see them live and you're like, fucking yes,' and then you've got to go on tour with them, and share a van, and go to Manchester. And it's disgusting. It's bizarre. Now it's just something that everyone says. But we're different from them in so many ways. They say, Scottish bands with their Scottish accents' but we've got completely different accents. I wouldn't want to say it's annoying because I'm sure they're big influences on us, I'm sure they are. When we first got told about our first Frightened Rabbit gig I thought, wow, they're to big to be playing with us,' to be honest.

I don't want to ask about your name, and where it came from, because I'm sure you get asked it all the time; but does it hint at some kind of disappointment? I mean it sounds to me like you were promised something but never got it, so the name seems tinged with sadness. A soundtrack to disappointment, We Were Promised Jetpacks but never mind. That could just be me reading far too much into it, though?
[Laughing to himself] No, I'm going to completely disappoint you here. We came to Glasgow and we had a really bad name. And no I'm not going to tell you what it was. If you had a good look online I'm sure it's kicking about there somewhere. It was one of our first gigs in Glasgow and someone referred to us as a joke band. So we knew we needed to change it. And we had a list of band names and We Were Promised Jetpacks was the best of the worst. We hated doing it. I still kind of hate the name. It's alright when folk, kind of, hear it and become curious to see us. I like people having crap band names and then being absolutely amazing. We have been fortunate I suppose because folk have said, that's an interesting name we'll give you a listen'.

What's the worse part about being in a band?
Once you've played a gig and you're trying to get away and someone comes up to you and asks, can you do this interview'. [Breaks down laughing] No we actually don't mind doing interviews, at all. 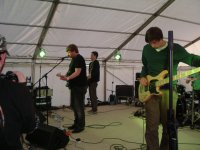