Majefa returns for one night only with massive Trance line up!

Keep track of Sound Control events, tickets and news - all in one place. Join this group now for updates as they happen!

With its spiritual home Sound Control closing its doors for good, Legendary Trance night Majefa returns for one night only.

Following the announcement that Sound Control is closing its doors at the end of 2017 for good, the venue contacted Majefa to see if we wanted to host one final party at the club before it is demolished and consigned to the history books.

Though our official closing party was last year, we felt that this would have been an opportunity we would have eternally regretted. With this being our 10th year of running events in Manchester, we felt that this would be the perfect send off for Majefa and Sound Control. This event will be a celebration of 10 years of Majefa and our 7 year residency held at the club. Sound Control was integral to the success of Majefa and took us from obscurity to the scale we could have never dreamed off all those years ago. The night itself will focus on the magic that Majefa is known for, no nonsense Trance, one big party and an atmosphere that is as famous as the brand.

We understand the music scene has changed over the years and many nights now focus on the huge line ups, 1 hour sets and big production ? forgetting the most important aspect, the music.

This event will focus on a couple of artists that are a master of their craft and understand the progression of building a set. We also wanted to make this an affordable night and tickets will start from only £10.

Attic: The Return Of The Legend 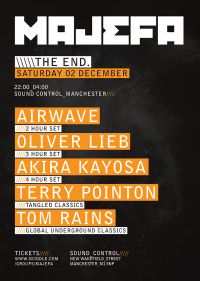