Keep track of S2S events, tickets and news - all in one place. Join this group now for updates as they happen!

OVER 79% OF ALL TICKETS HAVE NOW BEEN SOLD FOR PIERJAM! GROUP OFFERS WILL SELL OUT TONIGHT!

OVER 79% OF ALL TICKETS HAVE NOW BEEN SOLD FOR PIERJAM!
GROUP OFFERS WILL SELL OUT TONIGHT!

On Bank Holiday Sunday 5th May, the North West's most exciting series of daytime clubbing events; Pier Jam returns to the Iconic Blackpool North Pier, to celebrate a monumental 5 years of PierJam, this Summer 2019 .

The fifth season of the iconic PierJam parties, which kicks off on the 5th May, promises to be their biggest season to date with the launch event set to welcome 4,000 party people to soak up the sunshine, sea air and some of the biggest DJ & Live talent around.

Set across two outdoor stages and 2 indoor arenas of the stunning setting setting og Blackpool North Pier, the launch of the iconic day time party will feature a huge line up including chart-topper and house music legend Jax Jones, who will be heading up a whole host of house talent on the Sunset Stage. Responsible for some of the biggest dancefloor anthems including ?House Work?, ?You don?t know me?, ?Breathe? and many more, fans of the north west summer series will be sure to be moving and grooving until the sun goes down.

Joining Jax Jones we welcome PierJam favourite and a man who is without a doubt one of the most vital and influential house music artists of the present day; Low Steppa. For many years Low Steppa been producing some of the finest house and bass music around and touring the globe and remains very much at the forefront of the bass music scene.

James Hype joins the Sunset Stage bringing his high energy DJ sets and forward thinking production, which fuse the urban music world with house and garage and propelled him to the attention of the major players in the music industry, alongside Special Guest Radio 1 legend and ibiza regular DJ Danny Howard. Best known for his Radio 1 show ?Dance Anthems with Danny Howard? - he is sure to bring only the finest selection of dance music to the Pier with him.

Tech house DJ duo CDC will also be taking to the Sunset Stage for our Part One event! With their forward thinking and energetic sets they have charted in both the Deep and Tech House Beatport Charts and we just know they are the perfect round up to a strong lineup for our main stage.

Our Terrace Stage will be a celebration of all things bass music, showcasing some of the finest talents within the bass music scene throughout the course of the event and headlined by the one and only Industry heavyweights My Nu Leng & Dread MC. Hailing from Bristol, My Nu Leng are well known for their blistering sets and dark, smouldering vibes. Very heavy on the mood but always compulsively danceable. Their PierJam debut is sure to be a memorable one.

Rolling deep in every direction, we will be welcoming Preditah to the North Pier as a part of our Terrage Stage lineup. A key member of one of the original grime groups Boy Better Know, he has built some of the heaviest MC tracks in recent times, one of which being the huge ?Feed ?em to the lions?. With drops for days he will definitely be bringing in the crowds.

Topping off an already stellar lineup we?re bringing the entire Crucast crew to PierJam Part One. Crucast are a bass music group consisting of Skepsis, Darkzy, Window Kid, Bru-C, Mr Virgo, TS7 and Lazcru. Having each earned their own stripes within the music scene, they?ve now united to form a powerhouse group that are guaranteed to put on a killer show to kick off our fifth birthday celebrations in true style.

Having launched in summer 2015, the outside atmosphere and sea view backdrop on Blackpool Pier immediately created a special kind of clubbing vibe. To date it has showcased big names acts including DJ EZ, MK, Basement Jaxx, Shadow Child, Hannah Wants, Duke Dumont and many more. Pier Jam is primed to bring back the all-day clubbing vibe back for their 5th season, with fans promised plenty more surprises for the 5th birthday celebrations.

Tickets are now over 79% sold out, with group offers expected to sell out by tonight. Get tickets from just £20 per person on sale now from www.pierjam.com/blackpool 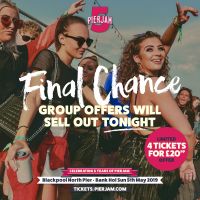