Keep track of Mint Festival events, tickets and news - all in one place. Join this group now for updates as they happen!

John Digweed returns to Hush Hush at Mint Club in Leeds, only this time he's bringing Guy J with him, who makes his long awaited Leeds debut. It seems that Good Friday could now be pencilled in for an annual pilgrimage.

Two behemoths of the UK clubbing scene come together again this Good Friday, 30th March 2018, to repeat what can be described as one of the best clubbing nights of 2017. John Digweed, set the bar high in April of last year at Mint Club, so high that even his biggest fans stated it was the best they had ever seen him, which is no mean feat considering he's been at the top for the last 25 years.

At Mint Club, he found an intimate space with an impressive Funktion One Sound system with a low roof, and a Watergate-esque lighting system. With a full club, all dialled in to the king of Progressive and Techno, the journey had begun. The crowd cheered every drop, enthralled at the seamless transitions that Digweed is known for. They could almost touch him, but they could definitely feel the music emanating from the aforementioned, glorious sound system.

If you haven't been to Mint Club, then I urge you to do so. Its not consistently voted the UK's best small club each year, for no reason. Its a knowledgable party crowd, full of revellers from around the country who come to see the Worlds best DJs play in a perfect environment. It's been a mecca for years, since the days of Back 2 Basics, and it will be for years to come. There is a reason why its always in the worlds top 100 clubs.

Digweed and Mint are a match made in heaven, and this years line up has been embellished with the debut of Guy J, owner of the Lost&Found label. Guy J's stock is rapidly rising and his melodic progressive house is a perfect fit on warm up for a marauding Digweed. They play together regularly, which tells you a lot about their chemistry. With extended sets for both, we can only see one thing, fireworks.

Hush Hush have got their line up spot on, but against their brand name, this shouldn't be kept a secret. As Wendy Lacy wrote on their Facebook Page after last years success, 'Friday night was the best night I've had out in ages! The music was incredible all night. Digweed was the best I've seen him for years. The sound was awesome and the crowd were amazing too. Met some great people there and it's such a pleasure to be in a room where people have travelled from all over the country just to dance. I'm still smiling about it now!' 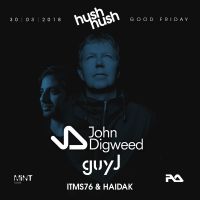