He will bring his set to Bakers, on Fowlds Street, on December 22 shortly after touring with Liam Gallacher and The View.

Kyle and his band are fresh off a triple header of sold out gigs in Glasgow last week at the 02 ABC.

But they have decided to take a break for a couple of years, leading to Kyle venturing out on his own.

Kyle said "Some of the gigs we play in Glasgow are beyond belief.

We have probably played over 400 shows in Glasgow which is unbelievable actually.

I never tire of playing in front of the crowds down here.

Kyle has played at Bakers three times before - two of the shows coming in the same day.

But its at the new Bakers venue in Fowlds Street which has a larger capacity.

On the upcoming show, he said: Its great coming to smaller venues like this actually.

Most of the shows with The View are mental, so it can be quite refreshing to get up and close with the fans in these intimate gigs.

I try and play new songs at these gigs, but I know everyone loves the usual stuff so generally I end up sticking with that.

But Ive got a new band for these shows now so I can get on with the new songs.

The fans at these shows never disappoint though. 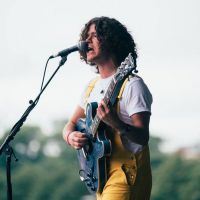