Comedy is back at The Art of Tea 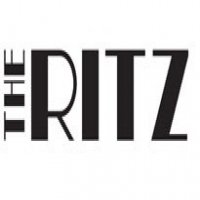 Keep track of Manchester Ritz events, tickets and news - all in one place. Join this group now for updates as they happen!

Comedy is back at The Art of Tea, Chris Kehoe, Harry Stachini, Roland Gent, Free admission, give us a donation on the way out

Comedy is back at The Art of Tea after a long covid lay off. Manchester's friendliest comedy chill out in Didsbury where everyone is welcome

?"A damn fine satirist." - The Skinny

"Brings much needed smarts to as many polemical subjects as he can. - AN IMPORTANT AND INTELLIGENT VOICE" - MANCHESTER WIRE

Off the wall observations of still living with your mum, from a great storyteller, whose appearance belies a fine mind

Lovell Smith is fast becoming one of the best acts in the West Midlands. Covers everything from the banality of life to dating disasters

Harry Stachini An act who quickly established himself on the scene and plays at the Comedy Store and Glee Club, sharp and witty with an easy going style. We are lucky to have Harry here he's going to pen up in fine style 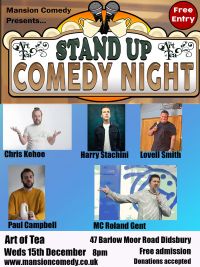