The Hellfire team have today announced there are less than 7% of all tickets remaining for their huge show this coming Saturday with Darren Styles, Teddy Cream and more at Hangar34 in Liverpool!

Attendees can expect a night of hard hitting tunes and monster drops, this is most definitely not a night to be missed.
With 93% of all tickets for this show sold out, it is highly advised that anyone wishing to attend purchases their ticket sooner rather than later to avoid missing out!
Final tickets can be purchased here: skiddle.com/e/13608108 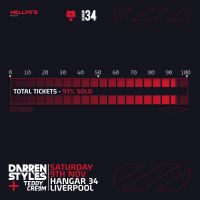