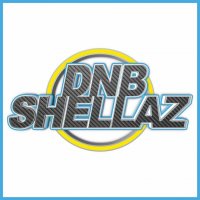 Keep track of DNB Shellaz events, tickets and news - all in one place. Join this group now for updates as they happen!

A brand new event that will continue to grow across the South of the UK! Get ready for a huge lineup and some amazing talent at an incredible venue!!

?Welcome To The Midnight Massacre VS The Proper Boppers ?

Are you ready for an underground Drum n Bass event like no other, from your hosts: The Midnight Massacre and The Proper Boppers?! We're bringing the Bass Back!

This is the first instalment of many sick events to come! ?
Brought to you by 2 of the biggest organisers in the South! The Midnight Massacre: Known for creating special and unique events in Cyprus and the UK & The Proper Boppers - And have they got a treat for you-
Showcasing the UK South's top crews: Rough Tempo/Suburban Chaos/Profound Beats/23 Audio & Sound Bully Audio.
Get ready for a huge lineup packed full of the sickest Drum n Bass in the South! !

Exile - A new alias to an industry he?s spent years creating music in, Exile is someone whose name is becoming synonymous with impeccable quality production and versatility. Having already carved out a career with internationally acclaimed drum & bass stalwarts, we?re hugely proud to announce Exile joins Subtle Sounds as an exciting new artist with years under his belt - not something one can usually easily and confidently say. Exile fuses sounds from his extremely varied musical background, and you can expect epic intros, screw-face synths and bass lines to keep you on your toes. With projects alongside the likes of Rhymestar, DubZero, Zeal, Miss Melody, Slipz and Mark XTC, Serial Killaz and more. Exile is someone who?s made friends in the industry and maintained them. Forthcoming releases come in the shape of top quality jump-up heavy-weight sounds, searing rollers with real, crisp basslines and impeccable mastering. Get ready for the next generation of drum & bass - get ready for Exile!
https://soundcloud.com/exilednb

JAYLINE has done more than most could accomplish in their 20s and now hitting his early 30s is very much an established DJ. Hailing from Basildon Essex he has stamped his mark worldwide as a DJ and is now doing the same as a Producer. He spent 2 years in Toronto and won the 2009 Drum and Bass Awards for the Best Club night of 2009. That in itself shows he knows his DJs, he knows his music and he still has his finger on top of it all, proving it with the remixes he is coming with currently.

Releases on Random Concept Digital led to bookings for him at The Roadmender in Northampton, for one of the UKs biggest Drum and Bass promoters, Random Concept. He has also plays for Rough Tempo, Definition, Breakin Science, Garden Of England, Junta, Ruff Agenda, Bassmania (Germany) Respect Drum & Bass (L.A) Skank n Bass (Belgium) Revolt (Belgium) to name a few.

Now with his own Label, Sound Bully Audio, he has teamed up with Barikade and Brockout to release the next generation to your ears.

Jayline has recently (2017) teamed up with Jekz his new label manager & partner to DJ Fly at The Garden Of England event promotion. Expect to see SoundBully label nights & a whole load of brand new SoundBully releases for 2018 & beyond.
https://soundcloud.com/jaylineuk

? Dj Arry H & Jessie Jo Present: The Profound Beats Showcase! ?
?Featuring: MC'S: Ridikule B2B Mozy! ?
This group of acts is going to blow the roof off of Shieks! Get ready for something big!

Just Jackson - JustJackson Is A Drum n Bass DJ, from the UK he grew up on electronic music from disco all the way through to Drum n Bass. Dj-ing for over 14 years he took his skills to Thailand where he had regular spots at the infamous " Full Moon Party " on the only Drum n Bass Bar. Headlining acts such as DJ Hype & Nicky Blackmarket amoungst others were regular visitors to the island and JustJackson had the privilage of warming up for these acts at KU CLUB, another classic beach venue!
From Thailand to Australia, JustJackson started his own Radio show on air and online in Byron Bay Australia, " Bassline " soon became very popular with regular guest interviews, live sessions & mixes, INCLUDING unreleased tracks and mixes from the likes of Dope Ammo Recordings and more!
JustJackson continued his path in the UK and went on to play at Boomtown Festival in the UK, one of the uk's most infamous festivals. Also creating nights in local areas including A headlining show with Harry Shotta & DJ Phantasy.
He continued to grow the DnB community in Cyprus by starting The Midnight Massacre which has now grown and stretched over to the UK. You can catch JustJackson on Rough Tempo & also at regular events with The Midnight Massacre across the UK & Cyprus.
https://www.mixcloud.com/JustJackson/

Rough Tempo resident Meloki started Djing in 1992 and has been around the scene both in the UK and Europe ever since.
in 2012 he started releasing music and his productions cover almost every sub genre of DnB-Jungle, From Ragga Jungle collabs with vocalists like Blackout JA and Da fuchaman on Totally Dubwise Records and UK Export thru to dark techy eps with labels like Nurtured Beatz and Danger Chamber Digital and more recent rollers with Lay Low Recs and Brawling Beatz plus various other labels and remixes done for artists like MelloDrama and Midway.
Meloki represent the full spectrum of Drum and Bass music and will guarantee a show you don't want to miss

DJ PURPLE RABBIT
Label manager, DJ, producer, Remixer and musician.
Purple Rabbit performed in clubs and festivals across the world, from Ministry Of Sound in London, to Da Freak in Kazakhstan,
Glastonbury, Solar, Sunset and many other festivals in Europe.
He plays a blend of dub, reggae, dancehall jungle, drum and bass and deep/tech/progressive house DJ sets.


? A T O M I X - U K
Known to all the UK South crew for his slick mixing and scratching skillz - ATOMIX is a fine addition to this line-up! Get ready for an energetic set packed full of Dancefloor, Jump-up, Neuro & Ragga Jungle..this DJ has it all and knows how to get the party started! Atomix has been a regular on the scene throughout the south ever since he could reach the decks, playing and organising the woods party events to spinning vinyl in Brighton at the famous Volks nightclub and obviously right here in Shieks itself!
Atomix has shared the booth with names like Harry Shotta, Logan D, Evil B, Serial Killaz, Ed Solo, JustJackson and more! Get ready dance like never before!

Born into the capital of electronic music & involved in the German Drum n Bass scene since the age of 17 and influenced by some of the biggest names in DnB: K.N.E.B. is one of our hardest members of the Midnight Massacre crew. Moved straight outta Germany to Cyprus in 2017,since then had shared the booth with names like Submarine/Survey/Phase/Dave Oven.......
Heavy/Steppy/Neurofunk/DNB/Jungle DnB/RaggaTek/Crossbreed is what he loves and knows to play and his energetic powerfull sets are defenetly something you dont wanna miss on a rave night.
Get ready for K.N.E.B


? M A N N A - D E
From Germany, this Drum n Bass producer has been in the game for a while and knows how to party! From the Techno underworld in Germany, to the streets & fields of the UK: M A N N A has seen it all. Giving us a blend of deep euphoric synths & hard hitting drums combined with a crunchy bassline, his sets always take you on a journey through time and space. Get ready for some heart stomping neurofunk and deep techy rollers sure to make your feet move on the dancefloor!

? D K B - U K
From the South of the UK and has been in the scene for a long time, rolling with the Rough Tempo crew. Catch him going back to back with Manna for a full on energetic roller set!

? B A P T I S T E - M O O N S H I N E R E C O R D I N G S
Baptiste Dupont - With 20 years experience burning stages and smoking microphones, Baptiste has paid his duty to the sound system scene and culture !
Originally from Normandy, France : he began his odyssey as a vocalist and frontman in 2000 releasing 5 tracks with KANKA and Oliva from BLACKBOARD JUNGLE ? the biggest rig in Europe with 24 scoops - on the acclaimed album Every night is dub . The Opus launched Baptiste into a new level of recognition in his home country and throughout Europe and got him releasing several 7?s and 12?s on various labels in the first decade of the new millenium. Back then, he has supported the likes of Lee Scratch Perry , MadProffessor, Asian Dub foundation , Freestylers, Plastician etc in the Reggae and Bass scene, and also MC for Drum?n?bass headliners such as Subfocus, Erb N Dub, Aphrodite, Distorted Minds, Coco Back 2 basics... to name a few .In 2016, he was the official MC for ZION TRAIN tour in Australia , in 2017 for RADIKAL GURU , and in 2018 for BENNY PAGE .
Off the beaten track ! From Reggae to Dancehall , Dubstep to DNB, Hip Hop to Steppa nor Jungle : Anything you want anything he?s got ! Versatile MC and selector with incredible energy Levels and conscious lyrics , he sets any crowd on fire and keep it real anytime : Fasten seatbelts ! His new release "Dancehall graveyard" is out on the 17th of august and already got played on Rinse FMby J-KENZO
https://soundcloud.com/baptiste-polyglock-ponpon
https://www.facebook.com/baptiste.ponpon

MC and Rapper from South UK. Skillsets: Drum And Bass, Hardcore, Hip Hop etc.. He says: " Versatility is key "
Reclusive has been a regular to the South coast events and always brings full on energy and great lyrics! An excellent edition to the team!

20 years in the game and still going strong, MC Midas is going from strength to strength. Best known for his song with MC Romeo from So Solid 'Too Dark'

The Midnight Massacre has touched down in the UK and we plan to bring you the same unique experience from Cyprus but with a UK twist! Get ready for the beginning of something very special! ???

Strictly 18 and over. I.D must be presented at the door.

See You On The Dance-Floor! 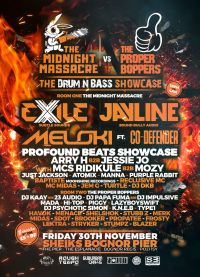