Keep track of AEG Live events, tickets and news - all in one place. Join this group now for updates as they happen!

deadmau5 will embark on a UK tour in December, with support from Zane Lowe, Magnetic Man, Calvin Harris, Stanton Warriors and Kim Fai.

deadmau5 will embark on a UK tour in December, with support from Zane Lowe, Magnetic Man, Calvin Harris, Stanton Warriors and Kim Fai. Tickets for the Manchester and London dates will go on sale with Skiddle this week!

One of the world’s biggest electronic artists, deadmau5 returns to the UK in December to embark on his biggest tour to date. The mau5 will make history as the first ever electronic artiste to headline London’s legendary Earls Court, following in the footsteps of Oasis, Pink Floyd and Madonna.

deadmau5 has assembled an amazing line up of electronic artistes to join him on what is set to be THE biggest electronic music tour of the year - including BBC Radio 1’s Zane Lowe, one of the hottest dubstep acts on the circuit Magnetic Man consisting of Skream, Benga and Artwork who are currently riding the wave of success following their top 10 hit ‘I Need Air’, self proclaimed re-inventor of disco Calvin Harris, electro duo Stanton Warriors and dancefloor favourite Kim Fai.

deadmau5, aka Joel Zimmerman, continues to push the boundaries of electronic music, and this tour will be no exception. The Tour, which kicks off on 8th December, will see him perform in Bournemouth, Leeds, Manchester, Coventry and Glasgow (highlights of which will be broadcast live on BBC Radio 1), and culminate in an unprecedented show in London.

Tickets go on general sale at 9am Friday 3rd September.
Get your tickets for Deadmau5 through Skiddle. 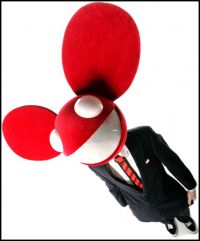