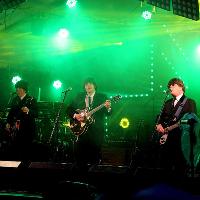 A Beatles Tribute Band - A typical show from THE PRETEND BEATLES will be more than 30 songs from across The Beatles career divided into two sets of 45 mins each (or one long set of 90mins) or longer sets by prior arrangement.

Usually in the first set the band wear costumes of the Beatles earlier performing years 1962 to 1966. For second set, the band usually wears later period Beatle costume, such as "Abbey Road". The sets include songs from across the Beatles career 1962-1970.

The band may be able to include requests in their set, so by all means ask if you have special requests and they will do what they can if possible to include these in the set, thereby playing more of your favourite era.

The Pretend Beatles hasn't been mentioned in our news coverage

Here are the latest The Pretend Beatles mixes uploaded to Soundcloud.