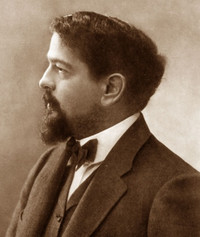 Achille-Claude Debussy (22nd August 1862 â€“ 25th March 1918) was a French composer. He was one of the most important figures in music at the turn of the last century; his music represents the transition from late-romantic to 20th century classical. Debussy's most dramatic contribution to music history was his disregard for traditional chord structures and tonality. He is one of the most important exponents of the whole tone scale in classical music history. His compositions flowed without a strict sense of metre or rhythm, and are considered the pioneering works of the impressionist genre of classical music, named in comparison with the visual arts movement. Debussy's impact was far reaching. His free use of harmony, which often altogether disregarded the concepts of tertian harmony, has been cited as an influence on the rise of jazz music later in the 20th century. User-contributed text is available under the Creative Commons By-SA License and may also be available under the GNU FDL.

Claude Debussy hasn't been mentioned in our news coverage

Below is a sample playlists for Claude Debussy taken from spotify.

Do you promote/manage Claude Debussy? Login to our free Promotion Centre to update these details.