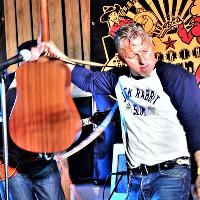 Rockabilly fans will know Bob Butfoy as the frontman of the wildly popular ‘Sleaze-a-billy’-pioneers; Jack Rabbit Slim and Bob & The Bearcats. In this capacity Butfoy made a name for himself as one of the heroes of UK’s Rock’n’Roll scene, and took the audience of the world’s top Rock’n’Roll and Rockabilly festivals by storm. Now, a decade and a half later, JRS ended at the top of their game, but Butfoy’s solo career is just taking off on its own. If you doubt how his solo act compares to JRS’s success, just have a listen to his first solo album, Deliverance, from late 2017. This album will take you though 12 masterly written and performed tunes and easily solidifies Butfoy’s solo career as important as his previous work.

Bob Butfoy & His Band hasn't been mentioned in our news coverage

Here are the latest Bob Butfoy & His Band mixes uploaded to Soundcloud.

Do you promote/manage Bob Butfoy & His Band? Login to our free Promotion Centre to update these details.