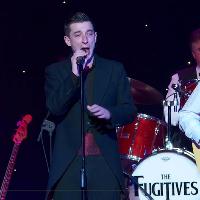 Ash Denver discovered his love of singing and performance while studying drama at university in Leicester, being involved in theatre productions where the arts are well supported gave him the encouragement to take this path as a career.

Under the guidance of Alan Greenwood, Ash took his first job 8 years ago, with a show team at a holiday park in Devon and spent some years entertaining holiday makers, at several holiday parks in the South West. Last summer he had a very enjoyable season with Thomsons, performing to guests at their hotels in Europe and on returning home, made the decision to work on a solo career back in UK.

Ash has since gone on to refine his own cabaret with songs from 50’s to present day and added a 60’s and 70’s show, performing at holiday resorts, hotels and venues around Britain. He recently appeared at a show case, where he was spotted and asked to join the cast of David Hamilton’s Rock and Roll Back the Years theatre show, as their lead male vocalist. The show will be visiting 40 theatres nation wide during 2016. This is Ash’s true passion, being involved with a live show and the chance to work with other musicians is the perfect performance opportunity for a vocalist.

Ash Denver hasn't been mentioned in our news coverage

Do you promote/manage Ash Denver? Login to our free Promotion Centre to update these details.